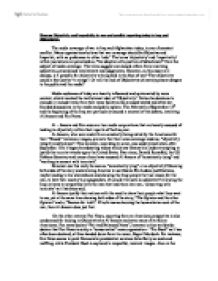 Discuss Objectivity and impartiality in war and conflict reporting today in Iraq and Afghanistan.

Discuss Objectivity and impartiality in war and conflict reporting today in Iraq and Afghanistan. The media coverage of war in Iraq and Afghanistan today, is one of constant conflict. Many organisations believe that war coverage should be Objective and Impartial, with no preference to either 'side'. The terms 'objectivity' and 'impartiality' within journalism are perceived as, "the adoption of a position of detachment" from the subject of media coverage. The terms suggest one should refrain from involving subjective, personalised involvement and judgements. However, as this essay will discuss, is it possible for objectivity to be upheld in the face of war? That objectivity could in fact just be "a mirage". Or will the lack of Objectivity ultimately present dangers to the public and the media? Media audiences of today are heavily influenced and opinionated by news content, which invoked the institutional ideal of 'Objectivity'. Networks decisions to exclude or include items from their news bulletins has aroused heated and often hot-blooded discussions in the media and public sphere. The Aftermath of September 11th and the beginning of the Iraq war particularly caused a renewal of this debate, involving Al-Jazeera and Fox News. Al - Jazeera and Fox news are two media corporations that are heavily accused of lacking in objectivity within their reports of the Iraq war. Al-Jazeera, who were and still are constantly being slated by the Americans for their "Biased" television images, promote that their news coverage endorse, "objectivity integrity and balance". ...read more.

In response to these images Lt. Josh Rushing an American Press Officer commented, "The night they showed the POWs and dead soldiers... it was powerful, because Americans won't show those kinds of images. It made me sick to my stomach. I just saw people on the other side, and those people in the Al Jazeera offices must have felt the way I was feeling that night, and it upset me on a profound level that I wasn't bothered as much the night before. It makes me hate war." He also commented on the lack of objectivity on both sides - the Americans and the Iraqi's; "When I watch Al Jazeera, I can tell what they're showing and what they're not showing by choice. It's the same thing when I watch Fox on the other end of the spectrum." Here Lt. Rushing realises that Fox News displays that same lack of objectivity which he accuses Al-Jazeera of perpetuating - his conclusion drives home the point that media bias is institutionalised on both sides and objectivity is a "mirage". The film poses the question; Can one really be Objective when faced with war? Is war something that makes emotionless involvement impossible for any involved party? Many journalists within each 'side' could argue that yes indeed, when presented with war, one is inclined to sympathise with its own country, so objectivity could in fact just be a "mirage". The debate of objectivity is not only just seen within Fox News and Al-Jazeera, it is also seen between governments and within other news organisations. ...read more.

However, one could argue that the report is just representing the truth of the situation, that they are telling 'both sides' of the story. On the other hand, a report by the Guardian could also be seen as lacking in objectivity. One report quoted a description of the girl, "The only picture of Abeer Hamza Qasim is the one that appeared on her Iraqi ID card, a black and white passport size photograph taken when she was maybe eight or nine, black hair, round face and big black eyes." By starting the report with this paragraph one could suggest that by putting a name and a face to the young girl would create sympathy and promote dislike towards the American soldiers. However, one could also argue that in a situation like this, where a young girl was raped and murdered for 'Something to do' sympathy doesn't need to be provoked; disgust and dislike come naturally to the reader. So could this report be biased - or just presenting the views of its readers? In conclusion it's clear to see that objectivity is something of a mirage. What really is objectivity? And can anyone be objective when writing about war? These are the questions covered and answered within this essay. Objectivity during times of war is not seen as a rule it's more of a guideline there to be used when necessary and it's obvious that objective reporting is hard when you are faced with war. Many news organisations try their hardest to be objective when reporting but what the readers perceive of 'objectivity' and 'subjectivity' are always bound to be different for each 'side'. ...read more.