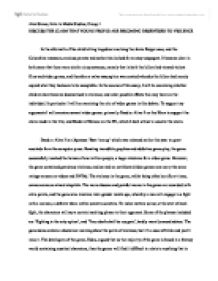 Discuss the Claim That Young People Are Becoming Desentised To Violence.

DISCUSS THE CLAIM THAT YOUNG PEOPLE ARE BECOMING DESENTISED TO VIOLENCE In the aftermath of the child-killing tragedies involving the Jamie Bulger case, and the Columbine massacre, anxious parents and authorities looked for an easy scapegoat. It became clear in both cases that there were similar circumstances, namely that in both the killers had viewed violent films and video games, and therefore a na�ve assumption was created whereby the killers had merely copied what they had seen to be acceptable. In the course of this essay, I will be examining whether children have become desensitised to violence, and what possible effects this may have on the individual. In particular I will be examining the role of video games in this debate. To support my arguments I will examine several video games: primarily Dead or Alive 3 on the Xbox to support the claim made in the title, and Medal of Honour on the PC, which I shall utilise to counter the claim. Dead or Alive 3 is a Japanese 'Beat 'em up' which was released earlier this year to great accolade from the computer press. Boasting incredible graphics and addictive game-play, the game successfully reached the homes of one million people, a huge milestone for a video game. ...read more.

Harris and Klebold enjoyed playing Doom, a classic, gory 'shoot 'em up' from the mid-nineties, which was also used by the US military to make their soldiers more efficient killers. On Harris's website they found a modified version of Doom, in which there were now two shooters (as opposed to the original one), each with extra weapons and unlimited ammunition, and the other people within the game are unable to fight back. Video games gave the youngsters an opportunity to practice their massacre, before they launched it upon the real world. It seems entirely plausible that without this game, the two boys may never have dreamt up such an awful atrocity. The film Bowling for Columbine by Michael Moore brought up an interesting number of points regarding the influences on the two boys. First, while the boys did play violent video games, they also occupied themselves with many other activities. On the morning of the killings, the boys went bowling for two hours. So why do people not turn their blame to bowling? Or perhaps books? Films? Music? Secondly, apparently 90% of children in Britain count themselves as regular video game users. Common sense will tell us that that this percentage does not equate into violent crime committed by children. ...read more.

It would be ignorant to view all violent video games as disruptive and harmful to a child's life. The game Medal of Honour is a 1st person shooter set in WWII, from the standpoint of the allies. The action is very graphic as you shoot numerous Nazis, but behind the violence the game very carefully educates the gamer on the history of the war, as well as warning future generations the perils of evil within the world that led to the outbreak of the war originally. From a personal standpoint, I find it extremely disappointing that there are some who link crime and violence involving children, with the content of the material which they have seen. When I was six I saw Aliens, a violent sci-fi film which carried an 18 certificate. In retrospect, I suppose that I had become, in a sense, desensitised to a small extent towards violence as I had never seen anything like it before. But I did not feel the temptation to commit and act of violence. From a broader point of view, we live in an ever changing world where violence and aggression is accepted as the norm. Has there ever been a more apt moment to give children an indication of what really lies ahead for them? 1 Barrie Gunther, The Effects of Video Games on Children, Sheffield Academic Press, p50 2 www.apa.org Alex Stones, Intro to Media Studies, Group 4 ...read more.