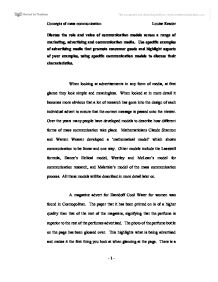 Discuss the role and value of communication models across a range of marketing, advertising and communication media. Use specific examples of advertising media that promote consumer goods and highlight aspects of your examples, using specific communication models to discuss their characteristics. When looking at advertisements in any form of media, at first glance they look simple and meaningless. When looked at in more detail it becomes more obvious that a lot of research has gone into the design of each individual advert to ensure that the correct message is passed onto the viewer. Over the years many people have developed models to describe how different forms of mass communication take place. Mathematicians Claude Shannon and Warren Weaver developed a 'mathematical model' which shows communication to be linear and one way. Other models include the Lasswell formula, Dance's Helical model, Westley and McLean's model for communication research, and Maletzke's model of the mass communication process. All these models will be described in more detail later on. A magazine advert for Davidoff Cool Water for women was found in Cosmopolitan. The paper that it has been printed on is of a higher quality than that of the rest of the magazine, signifying that the perfume is superior to the rest of the perfumes advertised. The photo of the perfume bottle on the page has been glossed over. This highlights what is being advertised and makes it the first thing you look at when glancing at the page. ...read more.

Orange also places their adverts at the beginnings and ends of commercial breaks to increase the chances of the viewers watching the correct channel. O2 are a mobile phone company that was launched in early 2002 after taking over from BT Cellnet. When they began their advertising campaign, they started off with short adverts on TV just saying O2. In magazines as well, it just said O2. No one knew who this company were. Then as time went on they started releasing more details about who they were and this culminated in their launch. After their launch, they continued to provide more information about themselves and the services they have to offer, the latest being media messaging and bolt ons. A communication model that could be used to describe this form of advertising is Dance's helical model. There is a diagram below. The model shows that communication is a circular process and is a two way relationship between the viewer and the company, in this case O2. As the viewer receives more information, the company is able to react to feedback, either through sales figures or customer enquiries and send out even more information for the viewer to process. For O2 this may be by providing extra services, such as bolt ons or just by providing them with extra information for example, use your mobile phone abroad. This means that as you move up the spiral it gets wider, due to more information being passed around. ...read more.

These factors may include the fact that the viewer is not reading the correct magazine, they may flick past that page by accident, or they may get sick of all the adverts in magazines, so they don't even bother looking at them and just read the articles. On the far right of the model there are factors that influence the receiver themselves. The receivers self image may affect their perception of the message. They may think that Monsoon are not their style of clothing, and avoid shopping there or looking at adverts associated with the shop. The personality structure of the receiver may be that hey aren't a very confident person so they would never dare wear an item of clothing from Monsoon. The receivers social environment would also affect the effectiveness of the advert. It is uncommon to find students walking around a campus in Monsoon clothing, whereas a person who had to do a lot of socialising as part of their job, such as PR probably would. Putting all these sections together creates the basic structure of the Maletzke's model. There are also other factors on the model such as the receivers image of the communicator and the communicators image of the receiver. There's also the case where there may be spontaneous feedback from the receiver. When studying adverts and campaigns there is no correct way in which the models being can be interpreted. It is down to the individual and their own understanding of it. Models can also only be used as guide because in reality, they are only a simplified version of events that can be used to cover a whole variety of events. ...read more.