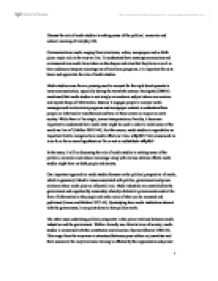 Discuss the role of media studies in making sense of the political, economic and cultural meaning of everyday life

Discuss the role of media studies in making sense of the political, economic and cultural meaning of everyday life. Communications media ranging from televisions, radios, newspapers and so forth play a major role in the way we live. To understand how contemporary society and communications media have taken on the shapes and roles that they have as well as how audiences interpret meanings out of television programs, it is important for us to know and appreciate the role of media studies. Media studies arose from a pressing need to account for the rapid developments in mass communication, especially during the twentieth century. Bazalgette (2000:6) mentioned that media studies is not simply an academic subject where one receives and repeats heaps of information. Instead, it engages people to analyse media messages such as television programs and newspaper content, to understand how people are informed or misinformed and how all these create an impact on one's society. While there is "no single, correct interpretation of reality, it becomes important to understand how media texts might be used in order to make sense of the world we live in" (McKee 2001:144). For this reason, media studies is regarded as an important field to recognize how media affect our lives. wI8p6bN Visit coursework ce in ce fo ce for ce more hypothesis ce Do ce not ce redistribute wI8p6bN In the essay, I will be discussing ...read more.

In media studies, we regard radio and television as industries where large number of people are employed and financed to produce what they do (James and Michael 1977:135). As media such as news broadcasting turn out to be increasingly popular, the news will eventually become a means of securing high viewer ratings that will ultimately boost the economy. With the invention and development of television, it also brought about economic development and because of this, job and educational opportunities are made possible for people of today. The other concern pertaining to economic perspective is capitalism. Corporations comprising of banking, insurance or advertising fields that are large and profit- seeking do contribute to the economy. These investors constitute a force that helps to integrate media companies into market strategies and with such pressure from competitive investors, it generates capitalism, bringing more profit into the media industry (James and Michael 1977:58). This means that with advanced capitalism where corporations reinvest part of its profits into developing new production methods, it will give scope for further industrialisation and globalisation. Eventually, media helps to open up new international markets for both cultural products such as magazines and music videos and consumer products such as television sets and fashion styles. From this perspective, media are seen as economic organisations designed to create profit as well as to foster a cultural environment. ...read more.

Then again, the vast diversity of messages made available by the media can give rise to a kind of 'symbolic overload', causing people to be confused when presented with excessive information (Thompson 1995:216). People might rely increasingly on the opinions of film or television critics to guide them in their viewing choices. Films and television programs that are strictly for the viewing by matured age groups may inevitably affect a child's thinking. Inappropriate, controversial content such as homosexuality, abuse and violence can bring about adverse effects as children assimilate information and learn from it. As a result, the media could be condemned by the public for portraying inappropriate content. To conclude, I have discussed on the role of media studies in making sense of the political, economic and cultural meaning of everyday life along with various effects media studies might have on both people and society. Indeed, people depend largely on media for information, images and entertainment of which they interpret and respond to their social environments. To a remarkable degree, we live in a media saturated milieu whereby our society is constituted by the media. Yet, there are consequences to consider when engaging in the study of media. Hence, it is vital to study the role of media studies in helping us to understand these aspects of society: political, economic and cultural in a comprehensive way. ...read more.