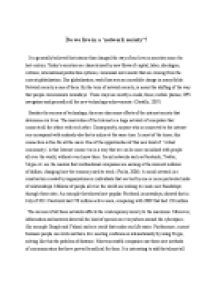 Do we live in a network society?

﻿Do we live in a ?network society?? It is generally believed that internet has changed the way of our lives in societies since the last century. Today?s societies are characterised by new flows of capital, labor, ideologies, cultures, international production systems, communal movements that are coming from the current globalisation. Due globalisation, world has seen an incredible change in many fields. Network society is one of them. By the term of network society, is meant the shifting of the way that people communicate nowadays. These ways are mostly e-mails, faxes, mobile phones, GPS navigators and generally all the new technology achievements. (Castells, 2007) Besides the success of technology, there are also some effects of the internet society that determine our lives. The innovation of the Internet is a huge network of computers that connects all the others with each other. Consequently, anyone who is connected to the internet can correspond with anybody else that is online at the same time. In most of the times, this connection is free for all the users. ...read more.

It is generally believed, that means such as YouTube and Web cameras have brought people closer in every continent. News and information are travelling with enormous speed in Cyberspace from blogs to news websites. People share their opinions and getting informed by the latest products in the market. Nevertheless, the invention of the internet has made our lives efficient by giving the privilege to purchase everything we want online, from websites as Ebay and Amazon, at any time. Nonetheless, network society supplies us with entertainment that human could not believe that would have before some decades. It is a huge accomplishment of technology that as community should be thankful for. (Castells, 2010) On the other hand, there is the opposite face of the coin which claims that the impacts of the internet on modern society are negative. In some societies, people use the internet in a different way. There are creating and putting viruses into the cyberspace, constructing like this problems to other users computer. Moreover, social network websites as Facebook and Twitter can turn into a bad idea for the users, as millions of people that use them share personal information that strangers can use in a wrong and appropriate way. ...read more.

Moreover, many organisations which are online have huge profits as it does not cost a lot to run and host a website. (Castells, 2010) However, the internet is the new trend of the masses which changed people relationships and way of communication. It is proved that social networks changed the society that we live in, turned it in a modern way of living. At the same time, millions of jobs have been created by way of the Internet, the economy and the way people purchase thing has also changed. Because of these reasons, the Internet has become essential in societies and will continue to influence our lives in a productive way. As scientists say, the internet is one of the biggest inventions of humanity, changing the constitution of society. The internet society has offered millions of new jobs to people and as long as the technology is developing, people will prefer to use the virtual community more and more. Concluding, social network websites are here to stay and the responsibility of the individual is to protect the socialization and sharing personal information online, which is on their hands. ...read more.