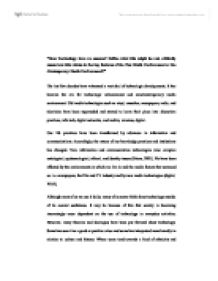 &quot;Does Technology have an essence? Define what this might be and critically assess how this relates to the key features of the New Media Environment or the Contemporary Media Environment?&quot;

"Does Technology have an essence? Define what this might be and critically assess how this relates to the key features of the New Media Environment or the Contemporary Media Environment?" The last few decades have witnessed a vast deal of technologic developments. It has become the era for technologic advancement and new/contemporary media environment. Old media technologies such as vinyl, cassettes, newspapers, radio, and television have been superseded and started to leave their place into discursive practices, info tech, digital networks, and mobile, wireless, digital. Our life practices have been transformed by advances in information and communications. Accordingly, the nature of our knowledge practices and institutions has changed. New information and communication technologies raise complex ontological, epistemological, ethical, and identity issues (Peters, 2003). We have been affected by the environments in which we live in and the media factors that surround us: i.e. newspapers, the film and TV industry and by new media technologies (digital, WAP). Although most of us we use it daily, many of us never think about technology outside of its current usefulness. It may be because of this that society is becoming increasingly more dependent on the use of technology in everyday activities. However, many theories and ideologies have been put forward about technology. Some has seen it as a good or positive value and some has interpreted more broadly in relation to culture and history. Where some tend towards a kind of ethnicity and materiality, the others view technology as something more than material, embodying cultural practices and symbolic forms (Peters, 2003). In this essay, in order to understand the way technology may be changing our views of ourselves and the world around us, we examine it thoroughly through exploring the ideas of Martin Heidegger, Rutsky and others, and few examples of new/contemporary media environment. Heidegger and the "essence" theory Martin Heidegger was widely regarded as one of the central figures of the existentialist movement and influential in the areas of phenomenology and ontology. ...read more.

It causes us to define cultural and racial differences that allow us, when we are more powerful. Heidegger suggests that the ultimate purpose of all this manipulation of life is simply 'the will to will' - self-assertion for the sake of more power. We are gripped by the compulsion to control things without realising that man is being controlled, at least in the way of thinking. Technology, however, can be a means to improve the living standard; it strengthens the power to control nature; and it is taken even as a way to freedom. But as Heidegger indicates, as man behaves according to the way which modern technology reveals, he blocks other possible ways of existence. So we consume never-ending quantities of entertainment and information and interact with representations of reality rather than reality itself. As for post-modern society, as the result of advance technology, Jameson (1990) claims that postmodern culture turns out to be high culture and mass culture, while exhibiting a "new depthlessness" that resists interpretation; involves imitation and not parody; reduces history to historicity, to a stereotyped and cliched set of images. "In the weaker productions of postmodernism the aesthetic embodiment of such processes often tends to slip back more comfortably into a mere thematic representation of content-into narratives which are about the processes of reproduction and include movie cameras, video, tape recorders, the whole technology of the production and reproduction of the simulacrum" (Jameson, 1990) Like Jameson, In Baudrillard's version of postmodernity, there is hardly any space for opposition or resistance because of the supreme hegemony of the controlling system: "Everywhere, always, the system is too strong: hegemonic" (Baudrillard, 1988, 163) Baudrillard is merely pointing out the various ways that consumer society and the simulacrum have won in their colonization of all "reality." Baudrillard points out that the loss of history, television, film, and the internet separate us from the real even as they seek to reproduce it more fully or faithfully. ...read more.

It contains both the danger and the saving power. If we allow it to transcend the limits of the body, we will also allow it to remove, forget, or separate us from our moods, our cultural location and belongingness, our finitude and vulnerability, our animality that helps comprise our linguistic and cultural identities, and also the meaning we give our lives http://www.utpjournals.com/jour.ihtml?lp=simile/issue9/PetersX4.html Conclusion There is a sense in which, for Heidegger, technology is the supreme danger to man. The essence of technology, in the Heideggerian sense, is the supreme danger because it prevents us from having a proper understanding of our own being. The essence of technology, in the sense of the understanding of being which makes it possible, is such as to exclude other ways of understanding being, for instance, those involved in creating and engaging with works of art. It is not just understanding being, but understanding being in manifold ways which makes us human. As such, the real danger of technology for Heidegger was the process by which the machines begin to alter our existence. since he rejects technical regression while leaving no room for a modern alternative, it is difficult to see in what that relation would consist beyond a mere change of attitude. Surely these ambiguities indicate problems in his approach Technology is not neutral. The tools we use shape our way of life in modern societies where technique has become all pervasive. In this situation, means and ends cannot be separated. How we do things determines who and what we are. Technological development transforms what it is to be human. No doubt Heidegger is right to claim that modern technology is immensely more destructive than any other. No one can deny that our society is immersed in technology, therefore we must try to understand technology and our relation to it or else we become ignorant captives of it, blind to the bondage that defines our daily activities. Technology is more than just our use of gadgets and tools to make common tasks easier, it is an understanding of the world as being apprehendable. ...read more.