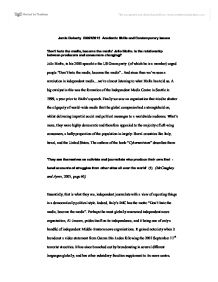 'Don't hate the media, become the media' Jello Biafra. Is the relationship between producers and consumers changing?

Jamie Doherty 200263915 Academic Skills and Contemporary Issues 'Don't hate the media, become the media' Jello Biafra. Is the relationship between producers and consumers changing? Jello Biafra, in his 2000 speech to the US Green party (of which he is a member) urged people "Don't hate the media, become the media" . And since then we've seen a revolution in independent media...we're almost listening to what Biafra has told us. A big catalyst in this was the formation of the Independent Media Centre in Seattle in 1999, a year prior to Biafra's speech. Finally we saw an organisation that tried to shatter the oligopoly of world-wide media that the global companies had a stranglehold on, whilst delivering impartial social and political messages to a worldwide audience. What's more, they were highly democratic and therefore appealed to the majority of left-wing consumers, a hefty proportion of the population in largely-liberal countries like Italy, Israel, and the United States. The authors of the book "Cyberactivism" describes them: 'They see themselves as activists and journalists who produce their own first-hand accounts of struggles from other sites all over the world' (1) ...read more.

Individuals' use of wed-based interactive websites isn't just restricted to social interaction and wikipedia.. The shrewder of Internet users out there can now become globally recognised, a familiar face in the sea of faces, if you like. There are several ways of doing it. The first would be to make a video of yourself and post it on a video hosting website, something which is accessible to millions of people worldwide and nearly always free- therefore a way of getting instant recognition. Like Facebook, this is only a recent phenomenon, but one which is becoming increasingly popular amongst Internet users. The range of videos you can make is seemingly limitless and these so-called video blogs (or vblogs for short) can make stars out of the people who are in them. A famous example is Chris Crocker, a young American kid who defended Britney Spears after she was on the receiving end of worldwide negative press. He became a star overnight; he was interviewed on CNN and ABC, he has been on various American chat shows, and he even has his own line of "Leave Britney Alone" merchandise. ...read more.

The trends certainly show no sign of declining, as more and more people gain access to the Internet, and sign up for interactive satellite TV., newer applications will be made available. Who truly knows what lies in store for the media in the future? It is too difficult to envisage what new interactive mediums people will dream of next, but there is no doubt that the next big phenomenon to take the Internet by storm will involve an element of interactivity. Not always made by the people but powered and popularised by them, interactive forms of media are a true sign that people have listened to what Jello Biafra said all those years ago and instead of showing animosity to the media, they have truly became the media themselves. Footnotes: (1) "Cyberactivism", Martha McCaughey, Michael D. Ayers, Routledge, 2003, page 60) (2) Nyland, Marvez, Beck, "Myspace: Social Networking or Social Isolation?", 2007,http://www.gentletyrants.com/wpcontent/uploads/2007/03/Nyland_Myspace%20isolation.pdf, (accessed 17/11/2008) (3) Maness, Library 2.0 Theory: Web 2.0 and Its Implications for Libraries 2006, http://www.webology.ir/2006/v3n2/a25.html, (accessed 17/11/08) (4) Crocker, interview on MSNBC website, http://www.msnbc.msn.com/id/20750575/ (Accessed 17/11/2008) (5) Collard, The Internet Music Revolution, http://mms.ecs.soton.ac.uk/2007/papers/34.pdf, accessed (17/11/2008) (6) various IBM staff members, Media and Entertainment 2010, published 2004 ...read more.