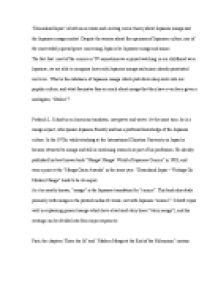 ﻿?Dreamland Japan? is both an accurate and exciting comic theory about Japanese manga and the Japanese manga market. Despite the worries about the openness of Japanese culture, one of the most widely-spread genre concerning Japan is be Japanese manga and anime. The fact that most of the comics or TV animations we enjoyed watching in our childhood were Japanese, we are able to recognise how early Japanese manga and anime already penetrated our lives . What is the substance of Japanese manga which puts down deep roots into our popular culture, and what fascinates fans so much about manga that they have even been given a neologism, ?Otaku1?? Frederik L. Schodt is an American translator, interpreter and writer. At the same time, he is a manga expert, who speaks Japanese fluently and has a profound knowledge of the Japanese culture. In the 1970s, whilst studying at the International Christian University in Japan he became attracted to manga and still is continuing research as part of his profession. He already published his best known book ?Manga! Manga! World of Japanese Comics? in 1983, and won a prize at the ?Manga Oscar Awards? in the same year. ?Dreamland Japan ? Writings On Modern Manga? tends to be its sequel. As it is mostly known, ?manga? is the Japanese translation for ?comics?. ...read more.

In ?Beyond Manga?, it seems as if Schodt wants to support Kojin Karatani's9 critical outlook on literature from a down-to-earth view. The author states ?What has had a larger impact on Japanese society as a whole is the increasing degree of crossover today between manga and what is normally thought of as ?literature? ? (Schodt, 1996, p. 287). In spite of the fact that established writers, who created manga in their youth but never became particularly famous or successful, treat that period with embarrassment, Schodt chases them by making their names known to the public. Sakyo Komatsu, best known for his famous 1973 science fiction novel ?Nihon Chinbotsu? (?Japan Sinks?); Hiroshi Aramata, one of Japan's most prolific writers and the author of over hundred fiction and non-fiction books; and the award-winning writer Amy Yamada; they all were manga writers in their past. Contrary to this, there are cases where already well-known manga artists give up creating manga and turn to writing. Tatsuhiko Yamagami had actually been a famous manga artist, but he turned to writing short stories or novels. However, he would have never attained as much fame as in his times as a manga artist (Schodt, 1996, p. 288) Moreover, there would be people who hold down two tasks at the same time. ...read more.

What I personally found envious (as a Korean) when reading this book is that the Japanese culture's years of history are stacked layer by layer, giving foreign academic professionals and students the possibility to research their culture, even through manga. ?As a form of popular culture, comics tend to be tightly woven with local culture and thought. In translation, manga ? especially ? can be both a medium of entertainment and a Rosetta stone for mutual understanding? (Schodt, 1996, p. 340). Another merit of this book is that it is based on the author's thorough analysis, elaborate and voluminous statistical data, and his rich material gathered over a long period. After researching Japanese manga and magazines meticulously over ten years, he finally finished the book. Hence having a wide field of vision, this book gives the reader confidence and trust. Frederik L. Schodt's ?Dreamland Japan ? writings on modern manga? is by no means inferior for scrutinising Japanese manga to the core. You will not only renew your perspective to manga, which might have been quite fragmentary so far, but you will also be surprised again by the potential power a comic industry can have. Despite the growing influence of the gaming and video industries the market for comics is expanding, and therefore verifying the potential of the medium called ?manga? through this book will be a very meaningful thing. Therefore for anyone, who wants to know more about the world of manga, I would recommend this book. ...read more.