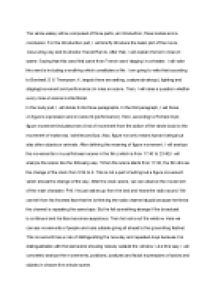 ESSAY PLAN FOR ANALYSIS OF THE FILM GROUNDHOG DAY

﻿The whole essay will be composed of three parts, an introduction, three bodies and a conclusion. For the introduction part, I will briefly introduce the basic plot of the movie Groundhog day and its director Harold Ramis. After that, I will explain the term mise en scene. Saying that this word first came from French word ?staging? in a theater, I will write this word is including everything which constitutes a film. I am going to write that according to Bordwell, D & Thompson, K, largely there are setting, costume(makeup), lighting and staging(movement and performance) in mise en scene. Then, I will raise a question whether every mise en scene is intentional. In the body part, I will divide it into three paragraphs. ...read more.

He just wakes up from the bed and hears the radio sound. We can tell from his frowned face that he is thinking the radio channel stupid because he thinks the channel is repeating the same tape. But he felt something strange if the broadcast is continued and his face becomes suspicious. Then he looks out the window. Here we can see movements of people and cars outside going all ahead to the groundhog festival. This movement has a role of distinguishing the new day and repeated days because it is distinguishable with the last scene showing nobody outside the window.? Like this way, I will concretely analyze the movements, positions, postures and facial expressions of actors and objects in chosen five-minute scene. ...read more.

In the last body paragraph, I will briefly talk about setting, props costume and makeup portrayed in the film, Groundhog day from the self-chosen scene. Because the main point I should focus on is the figure expression, figure movement and lighting, I will shortly mention the other parts of mise en scene in the film. For example, I will explain the meaning of the clothes Phil and Rita are wearing and the role of objects around the main character such as coffee in the lobby of hotel or a plash Phil continuously passes by. In conclusion, I will sum up the main points I made in previous paragraphs and emphasize the role of mise-en-scene in the film. Also, I will conclude that as we can see from clues above(movements, lighting and costume and so on), we can say that most of the mise en scene is intentionally planned. ...read more.