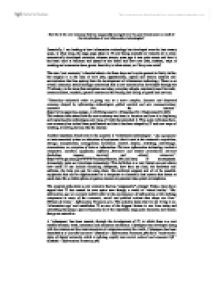 Essentially, I am looking at how information technology has developed over the last twenty years, in what ways, the large steps taken in IT now being available to virtually all in more economically developed countries,

How far is the new economy that has supposedly emerged over the past twenty years a result of the introduction of new information technologies? Essentially, I am looking at how information technology has developed over the last twenty years, in what ways, the large steps taken in IT now being available to virtually all in more economically developed countries, whereas twenty years ago it was quite scarce and how it has been used in business and spread to the home and how new jobs, markets, ways of working and economies have grown from this, to what extent, or if they even exist? The term 'new economy' is banded about a lot these days and is quite general to firmly define but roughly it is the area of new jobs, opportunities, capital and money creation and accumulation that has sprung from the development of information technology. There is an overall consensus today amongst economists that a new economy has developed through the IT industry, in the ways that computers are today, everyday objects, commonly used for work, communication, research, general interest and the buying and selling of goods and services. "Yesterdays industrial order is giving way to a more complex, dynamic and dispersed economy shaped by information technologies, global markets and new communications networks like the internet" (http://www.ppionline.org/ppi_ci.cfm?knlgAreaID=107&subsecID=196&contentID=865). This website talks about how the new economy was born in America and how it is displacing and replacing the technologies and ways of work that preceded it. ...read more.

Through the late 1980s and early 1990s, IT had been developing at a steady rate, becoming ever more popular in the business world, for the more speedy, profit enhancing reasons that I previously described. Only the relatively affluent population could afford to own a home computer system thuogh and computers, in general, had not caputerd the publics imaginations as they surely would later on. Computers were seen as useful for working at home and the such but as they were only just really being set out into the home market in redent years, there was some technophobia and people did not know how to fully utilise this new technology. As technology developed, so did the numbers of people looking to purchase home computer systems and use them for a wider rnage of activities. "Almost 35 million americans operated a full or part-time business at home in 1990 (this number increased to 40 million in 1993)" (Rosenberg - The Social Impact of Computers, p593). The late 1980s and early 1990s were the early periods of the home computer system. With the development of more user-freindyl software and overall increased public awareness and knowledge, personal computer (PC) ownership would increase. 1985 1990 1995 2000 2003 2005 U.S. PC Sales (M) 6.6 9.5 21.4 46.0 48.3 56.6 U.S. PC Revenues ($B) 17.2 24.5 56.8 86.9 78.1 84.5 Worldwide PC Sales (M) 11 24.2 70.1 130 149 181 Worldwide PC Revenues ($B) 29.5 71.3 155 247 243 270 This table shows how PC sales have dramatically increased in the past twenty years, both worldwide and in the USA. ...read more.

I personally believe that it is clear to see that the new economy still exists to this day. It is smaller then at its growth peak of around 2000, but it is full of more competitve companies who are able to offer better services to the public and the barriers to entry aer now greater as the industy consolidates itself so that it will not collapse so spectacularly as it once did. "It is likely that the web - or its successor - will continue to be used in the decade to come" (Varian - Economics of Information Technology, p10). This is part of the proof of the new economy, with the internet, at present, being at the foremost of society both socioculturally and economicall, these days, coming about through the Silicon Valley boom and the new economy in general. "Sound operations... depend on effective and efficient processes, which are the operational spine of any organisation. They also require the use of information systems, like the internat which function as the central nervous system of the organisation" (Harmon - Business Process Change: A Manager's Guide to Improving, Redesigning and Automating Processes, px). This shows that even 'post-bust' the internet is more crucial then ever to the effective runnig of a top organisation and now that the public have been given the internet and watched it develop into something which is much safer, easier, useful and very convenient to use, that it is demanded and so there is still a new economy, shown in the upturn of PC sales from the bubble burst and projected upturns, forecast and current economic, consumer and social climate. ...read more.