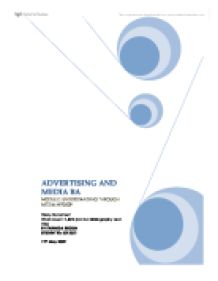 ADVERTISING AND MEDIA BA MODULE: UNDERSTANDING THROUGH MEDIA MP0509 Essay document Word count: 1,574 (not inc bibliography and title) BY FAHMIDA BEGUM STUDENT ID: S013351 19th May 2009 Evaluate Corwin's claim that Metallica's 'One' illustrates Descartes' conception of the interaction between mind and body This essay will address the issues on Philosophical thinker Rene Descartes' work on dualism, through the analysis of the song 'One', by US thrash metal band 'Metallica'. The song similarly explores and evokes the interaction between mind and body dualism through Joanna Corwin's understanding of the song which will be evaluated against Descartes. The essay begins by giving an outline of Rene Descartes; his beliefs and knowledge. The essay then discusses Metallica's song which is from the soundtrack of the movie 'Johnny Got His Gun' (Irwin 2007:174). The focus of this essay will be based on Descartes Second Mediation 'The nature of the human mind, and how it is known better than the body' and Sixth Mediation 'The existence of material things, and the real distinction between mind and body' Rene Descartes (1596-1650) not only was he a philosopher but a mathematician, a man of science and even a mercenary for some time in his life. ...read more.

(2007:174). Which many philosophers struggle to explain including Descartes; (1996:18) 'I do not know, and for the moment I shall not argue the point, since I can make judgements only about things which are known to me, I know that I exist; the question is what is this 'I' that I know?'. We can only begin to try and understand Joe's condition as we are being educated about such things, but what about those who are really facing such difficulties? What about those who are in a coma, they are presumed brain dead and being 'kept alive' by a machine, but inside they might be screaming for help just the way Joe is. Descartes points out in his Second Mediation, (1996:59) 'although the whole mind seems to be united to the whole body, I recognize that if a foot or arm or any other part of the body is cut off, nothing has thereby been taken away from the mind.' So here he is proposing that even if you are physically disabled, your mind won't be affected. This is the point that Metallica are trying to get across through this song. ...read more.

'there is nothing that my own nature teaches me for vividly that that I have a body, and that when I feel pain there is something wrong with my body...so I should not doubt there is some truth in this.' Here he admits to knowing that there is a link and interaction between mind-body, and it would be difficult without one or the other. In conclusion to the essay, Descartes overall objective in the Meditations is to question knowledge. To explore such metaphysical issues as the existence of God and the separation of mind and body, it was important for him to distinguish what we can know as truth. Corwin is correct in linking the song to Descartes, even if the song doesn't aim to solve the mind-body interaction. The song evokes the topic and explores the 'aftermath' of one going though the very process of 'living' with the mind only. Through the song Metallica reveal the anguish that Joe is going through. It does prove that is it very difficult if not impossible to socialise or communicate without both. Its clear Descartes did come across various difficulties when trying to come up with evidence and conclusion to his mind-body dualism theory. Through this essay we see that even the greatest of Philosophical thinkers can't always prove their beliefs and thinking. ...read more.