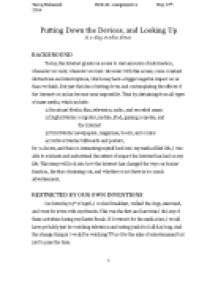 ﻿Tareq Mohamed MCS101: Assignment 4 May 19th, 2014 Putting Down the Devices, and Looking Up A 1-day media detox BACKGROUND Today, the Internet grants us access to vast amounts of information, whenever we want, wherever we want. However with this access, come constant distractions and interruptions, which may have a bigger negative impact on us than we think. But just the idea of sitting down and contemplating the effects of the Internet on us has become near impossible. Thus by abstaining from all types of mass media, which include: 1) Broadcast Media: film, television, radio, and recorded music 2) Digital Media: computer, mobile, iPad, gaming consoles, and the Internet 3) Print Media: newspapers, magazines, books, and comics 4) Outdoor Media: billboards and posters, for 24 hours, and then re-immersing myself back into my media-filled life, I was able to evaluate and understand the extent of impact the Internet has had on my life. This essay will look into how the Internet has changed the way our brains? function, the fear of missing out, and whether or not there is too much advertisement. RESTRICTED BY OUR OWN INVENTIONS On Saturday 19th of April, I cooked breakfast, walked the dogs, exercised, and went for swim with my friends. This was the first and last time I did any of these activities during my Easter Break. ...read more.

You don?t want to be the only person in the group who hasn?t seen the latest episode of Game of Thrones or the person who doesn?t know about the viral gif that everyone is talking about. So what I, and we in general, tend to do is consume as much media as impossible. And we do so through multitasking. Another reason is that we keep doing many tasks at the same time. By doing so we are less creative and less productive, as we disperse our concentration on several things rather than focusing on a single task at a time. I always have this strong compulsion to multitask. For example, I can?t just sit and watch television; I also have to have my computer on my lap while simultaneously playing a game on my phone. It has gotten so out of control that even when I?m in the shower, there has to be a podcast or music playing. Hence what made the media fasting even more relaxing is that for the first time in a long time, I was able to do something and enjoy it for what it is. FOMO (Fear Of Missing Out) This takes me to the next point that is, how stressful we get by using the Internet and particularly social media. ...read more.

I?m not saying stop advertising completely, after all I am majoring in Marketing, but just limit it. I don?t think advertising has changed the way I view the world or the way I think; the only thing it did was convince me to make certain purchases and that?s what it is meant to do. It?s just that we have become numb to it. Advertising just lost its influence with all the clutter. London has lost its beauty, when all you could see are the yellow arches of McDonalds and the deep red of Coca-Cola. By reducing the number of outdoor ads, our minds would have a bit more space for ideas, plans, or just to daydream (Lawson, 2012). CONCLUSION If there is one thing I learned from this experience is that the Internet has a negative impact on the way I think and live. I find it really interesting that every time someone brought up the topic that I spend too much time on the internet, I would respond with ?So what? It?s not like it?s harming anyone.? And if it weren?t for the media detox I wouldn?t have noticed that I have a much shorter attention span than before, that I?m actually not able to concentrate on a single task, or the fact that social media is causing me more stress than pleasure. I think it is time for us to put down the devices, and just look up. ...read more.