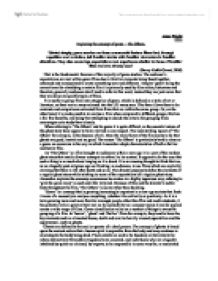 Exploring the concept of genre - The Others.

Jenna Wright DJA3 Exploring the concept of genre - The Others. 'Stated simply, genre movies are those commercial feature films that, through repetition and variation, tell familiar stories with familiar characters in familiar situations. They also encourage expectations and experiences similar to those of familiar films we have already seen' (Barry Keith Grant, 1995) That is the fundamental theorem of the majority of genre studies. The audience's expectations are met within genre films due to familiar elements being fused together, enhanced and manipulated to create something new and different. Despite 'genre' being the correct term for classifying a certain film it is primarily used by film critics, historians and theorists, generally audiences don't tend to refer to this word, instead they are just aware that they are drawn to specific types of films. It is useful to group films into categories of genre, which is defined as a style of art or literature, as there are so many released into the UK every year. This then allows there to be contrasts and comparisons extracted from films that are within the same group. Or, on the other hand, it is made possible to analyse a film when compared to different groups, this has a fair few benefits, one being that attempting to decide the criteria for grouping films encourages us to study them closely. When referring to 'The Others' and its genre it is quite difficult, as the essential nature of the ghost story does appear to have evolved in one respect. The most striking aspect of 'The Others' for example, is the absence of evil. Here the main factor of the film seems to be that ghosts are good, mortals not so good. The reason 'The Others' is particularly hard to class as a genre on occasions is the way in which Amenabar adapts characteristics of both a thriller and horror film. As 'The Others' is a film brought to audiences within a new age it is a part of the modern ghost story that entails diverse concepts in referral to its content. ...read more.

Although the house is personified and justified as an actual character within the film it is in fact the actors within and around the house that establish the milieu of the premise. What is amazing is the actual insignificance of the central characters in comparison to the mansion, however, that is ultimately the only stable thing within the film. A factor of the house, which works particularly well in conjunction with certain characters, is the stairs - probably the most symbolic aspect of the restricted setting, they not only separate the different levels of the house but also ultimately segregate the world of the living and the dead, 'the others'. Another example of this is where Ann is at the top of the stairs - this is a symbolic reference to her and her family's position in limbo, this also relates back to one of the main themes running throughout the film, religion. All this is what allows the stairs to be the beholder of the audience's mystery and intrigue as they contemplate what is at the top of them. In coincidence with the simplistic twines of Amenabar's 'The Others', he again uses this tone in the sense that he opts for furnishing the large rooms of the mansion barely and sparsely. Instead of relying on effects or elegant locations, the director again excels his elf in originality as he pares the entire setting down to its bare bones. Again, this is another link back to gothic traditions as he reminds us just how unsettling a long, dark corridor or a room full of furniture can be. Alarmingly isolating and intimidating. Amenabar reinforces the house as a central character with many references to it from the characters. Remarks from the former residents of the house who have now returned as servants for Grace and her children concrete the house's validity as a character as we now learn of its own history. ...read more.

The scene is incredibly full of tension as the audience anticipates the suspense being broken, a figure, but nothing comes. Because we don't actually see 'Victor' it is this that makes him a ghost to us, as we can't define him, we can't concrete what he is because we are not sure whom or what he is yet. Dissimilarly, Charles enters the film in a way that, similar to his detached behaviour leads us directly to realise that he is, in fact, a ghost. Amenabar is cleverly attentive to always diverting the audience's mind from what they may be starting to figure out and again he is successful here as he distracts us from the fact that Grace might actually be a ghost as well. The film revolves around a number of key themes, the most potent concept of the film are the links to the key themes in Victorian gothic novels ('Dracula', 'Frankenstein') - recognition in overall theme of things in relation to God, maintaining a sense of who we are. In 'Dracula' there is a distinct link to God where he tries to challenge God and the character is ultimately destroyed because of it, and similarly in 'Frankenstein' the doctor tries to snatch God's role and is also ruined as a consequence. In 'The Others', Kidman's character attempts to 'cheat' God as she doesn't recognise her existence, or lack of it until the end. Like many ghost stories, Amenabar has depended on denial in terms of the whole construction of Kidman's character, her inability as a dead person to accept her fate is what makes the film. It is an intriguing concept to think that although our bodies crumble and decay, our spirits seem to refuse what's happened to them. Despite being dead from the start, Grace is in conclusion destroyed psychologically by the comprehension that she has murdered her children and committed suicide - she has committed the ultimate crime against God. Religion therefore plays an immensely large role in the film, particularly when the links to gothic horror are taken into consideration. ...read more.

This essay has some truly remarkable insights in it, and the author clearly is both passionate about and familiar with her subject, but it lacks good structure and so the often brilliant description seems to meander aimlessly for awhile, before ending bewilderingly...

Also, an essay that refers to so many theories should contain a bibliography and proper references.

I would like to award a high 2.1, that is 4 stars, for the often incredibly incisive descriptions of mise en scene, plot and performance, but in the context of the essays other weaknesses this would not be an honest or accurate reflection of it's actual likely grade. Therefore I award it 3 stars.