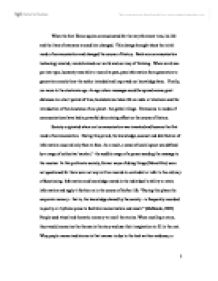 Extensions in modes of communications have had a powerful determining effect on the course of history.

When the first Homo sapien communicated for the very foremost time, his life and the lives of everyone around him changed. This change brought about the initial mode of communication and changed the course of history. Each new communication technology created, revolutionized our world and our way of thinking. When word was put into type, humanity was able to record its past, pass information from generation to generation exactly how the author intended and improved our knowledge base. Finally, we move to the electronic age. An age where messages could be spread across great distances in a short period of time, books/stories takes life on radio or television and the introduction of the closeness of our planet- the global village. Extensions in modes of communications have had a powerful determining effect on the course of history. Society originated when oral communication was invented and became the first mode of communication. During this period, the knowledge, account and distribution of information occurred only face-to-face. As a result, a sense of social space was defined by a range of collective 'earshot.' -the audible range of a person sending the message to the receiver In this preliterate society, former ways of doing things (Monolithic) were not questioned for there were not any written records to contradict or refer to the old way of functioning. Information and knowledge rested in the individual's ability to retain information and apply it further on in the course of his/her life. ...read more.

(MacLachlan, 120) As knowledge could now be picked up from a book, the younger generation could by acquire a lifetime of knowledge in a short period of time instead of relying on the people who previously controlled the knowledge. In many ways, the age of unquestioned authority was over. The printing press revolutionized the content that had been previously written. Since the church had a monopoly over writing, the subject matter had previously been theological works and chronicles. Now the printed books began to include, literary works like "the Iliad" and scientific speculation as well. Also, during this period of print culture, books and newspapers emerged and were mass produced. Printing and mass production of books, created the concept of authorship, decrease of production costs and the increase of sales. With the mass production of books, people's way of thinking was altered. McLuhan argues (Grossburg, 44) that by the constant linear movement made while reading, changed and standardized peoples way of thinking into a linear one; enabling one to think about other people, space and time linearly. The other standardizing effect was the creation of the national languages and standardized spelling and vocabulary for an individual state. Books were being written in other languages other that Latin, so that writing could reach more people. "Printing gave a strong impetus to the use of national languages instead of Latin and thereby encouraged national feelings." ...read more.

They have the ability to restrict information and withhold knowledge. Although they use different mediums to present there opinions, the opinions are the same. Even all the Pope's were or are captivating speakers and the in the Middle Ages, notorious for trying to hoard all the power and information such as writing. The uniform message from oral to electronic times further reinforces the idea that some technologies have different effects on people as well as history. Technology and communication revolutionized human life as a society and as a culture. New technology determines, for the most part, how life will change in the future. One of the first technologies, oral communication, created a culture which significantly changed human behavior. The transmission of information became possible and ideas were passed on from generation to generation. The invention of writing not only made it possible to keep an accurate account of events, but actually changed the way people think, into a linear way. The printing press and the literate culture created information available to the masses, unification of peoples and the explosion into the world of discovery and science. This explosion leads to the electronic culture, where communication became instant with telegraphs, television, telephone, radio and internet. Society's approach to work, space and time changed from a linear way of thinking and doing things into to a diverse way. Messages and information are instantaneous around the globe and with the ability of portable technology, instantaneous information and communication are possible anywhere. Each mode of communication, throughout history, had been created by the introduction of new technologies and its ability to change society. ...read more.