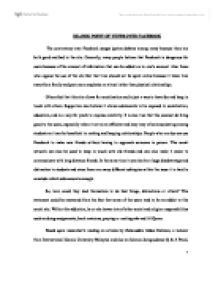 ISLAMIC POINT OF VIEWS OVER FACEBOOK The controversy over Facebook usages ignites debates among many because there are both good and bad to the site. Generally, many people believe that Facebook is dangerous for users because of the amount of information that can be added on to one's account. Also those who oppose the use of the site feel that time should not be spent online because it takes time away from family and puts more emphasis on virtual rather than physical relationships. Others feel that this site allows for socialization and is just a way to have fun and keep in touch with others. Supporters also believe it allows adolescents to be exposed to socialization, education, and is a way for youth to express creativity. It is also true that this account do bring good to the users, especially when it act as an efficient and easy way of communicating among students as it can be beneficial in making and keeping relationships. People who are shy can use Facebook to make new friends without having to approach someone in person. This social network can also be used to keep in touch with old friends and can also make it easier to communicate with long distance friends. In the same time it can also be a huge disadvantage and distraction to students and since there are many different subtopics within the issue it is hard to conclude which side accurate enough. ...read more.

When the girl enters, he drives, kidnap, raped and murders her and police have no idea that Ashley is being killed by him until he mention that he accidently kills someone5. It is also being mentioned that this Facebook networking site allows strangers or not, either men or women, to download other user's photo for their private viewing without getting permission from the person to keep it6. However, to blame men only for doing that immoral activity alone is unfair as, sometimes, there are gorgeous and beautiful women outside there who willingly upload their photos to be views by the society. Another point is that, Facebook is a "should not to have" when people start to tag photos which maybe controversial and not to be uploaded to be viewed by others. This tagging of photos is good when a person want to share with their friends the sweet and happy moments that they have been through but turns bad when it cause embarrassment to other person. For example, there is one case related to this point which is a British woman, kill herself when her nude photos being upload and her ex boyfriend have been accused for tagging the photos in the Facebook. The victim, Emma Jones, a teacher at one of the international school in Abu Dhabi thought by officers to have drink poisonous cleaning fluid which has take her life. ...read more.

This can be done by promoting Islam through the sharing of videos, links or articles. This also could be done by spending and limit the amount of time in discussing personal issues on Facebook because the longer the time the possibility to be more emotional in saying things without deeper thinking is high. Moreover, the users are also advice to share less on their personal private information like phone number, home address, and account numbers or else and for female users to upload less any eye catchy photos. Another tip is that Muslim users are also being recommended not to involve in applications like games, fortune telling or any that against to Islam law. The users also strictly advice from stop doing in Facebook like revealing a) Birth date and place; can give hints to strangers on account bank numbers, passwords etc b) Vacation plans; this invites criminals by saying that you are on vacation and nobody at home! c) Home address; if you are a rich person, it will be easy for criminals to target their next victim! d) Confessionals; misused of social site as a place for confessions of hatred, anger, or unsatisfied with employer, friends, universities, colleges can harm yourself later. Thus, users must always bear in their mind that any information that they post on Facebook can be used as one of the sources for government and secret agencies to keep an eye and monitor their daily activities. ...read more.