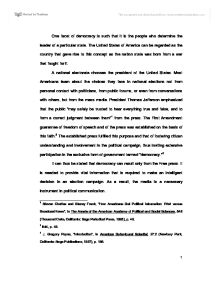 One facet of democracy is such that it is the people who determine the leader of a particular state. The United States of America can be regarded as the country that gave rise to this concept as the nation state was born from a war that fought for it. A national electorate chooses the president of the United States. Most Americans learn about the choices they face in national elections not from personal contact with politicians, from public forums, or even from conversations with others, but from the mass media. President Thomas Jefferson emphasized that the public "may safely be trusted to hear everything true and false, and to form a correct judgment between them"1 from the press. The First Amendment guarantee of freedom of speech and of the press was established on the basis of this faith.2 The established press fulfilled this purpose and that of fostering citizen understanding and involvement in the political campaign, thus inviting extensive participation in the exclusive form of government termed "democracy."3 It can thus be stated that democracy can result only from the Free press. It is needed to provide vital information that is required to make an intelligent decision in an election campaign. As a result, the media is a necessary instrument in political communication. ...read more.

and party advertisements.13 Therefore, the negative advertisements produced were not directly linked to Clinton, and the electorate continued to view him in a more tolerant light. 19 negative advertisements were produced in the 1992 election that discredited his opponent George Bush.14 To illustrate, a common format utilized was that of showing Bush making a memorable promise followed by an announcer's rebuff. By portraying Bush being used against himself, the negativity was disguised and the advertisement was not perceived as negative by the viewer.15 Nonetheless, it was still a harmful advertisement and ultimately, a manipulation of the media by the presidential candidate. It is important to realize that it is the candidate manipulating the media by purchasing airtime or space on the respective mediums, and thus determining what the viewer, listener or reader will receive. Therefore, the information received from these mediums is biased, and cannot be used to make a democratic decision. It can be argued that because of voter apathy, the presidential candidate must do everything in his or her power to induce the electorate. For example, the 1988 election produced the lowest voter turnout since 1924.16 Approximately 50 percent of the population bothered to vote.17 Furthermore, this election also produced the highest level of dissatisfaction ever recorded by opinion pollsters.18 The Clinton campaign attributed this apathy to voter alienation.19 This resulted in the development of the belief that political participation is meaningless and ineffectual. ...read more.

As time has progressed, an increasing number of potential representatives are practicing public politics. This comprises of the representative actively seeking the public's opinion on issues, and making their own views known. The best way for this to be accomplished is through the media. In a short period of time, a large number of people are informed of the potential representatives' position. Unfortunately, an increasing number of potential representatives for the highest position in the country, that of the president, are utilizing extreme strategies to insure a win. The various means by which the electorate can receive information are being incorporated and considered in the strategic planning. In short, the media is being manipulated. This manipulation results in only one facet of the information concerning the candidate to be revealed, that of which he or she wishes the electorate to know. The media has become a tool of the government, and there is a consequential loss of democracy. Therefore, public politics do not insure democratic politics. Presidential candidates seem to be following the advice of an unlikely mentor - Malcolm X - who advocated achieving political goals "by any means necessary".28 But, this approach must not overlook what is inherent and the fundamental right of the people. If the American society continues to allow this, the country and its citizens will be reduced to the state that was originally fought to be removed: a country where the government decides on what its citizens should know, and thus think. ...read more.