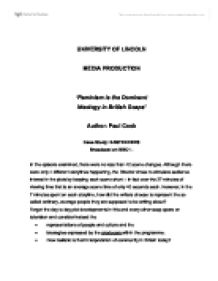 'Feminism is the Dominant Ideology in British Soaps'. - case study of Eastenders.

UNIVERSITY OF LINCOLN MEDIA PRODUCTION 'Feminism is the Dominant Ideology in British Soaps' Author: Paul Cook Case Study: EASTENDERS Broadcast on BBC1 - In the episode examined, there were no less than 42 scene changes. Although there were only 4 different storylines happening, the Director chose to stimulate audience interest in the plots by keeping each scene short - in fact over the 27 minutes of viewing time that is an average scene time of only 40 seconds each. However, in the 7 minutes spent on each storyline, how did the writers choose to represent the so called ordinary, average people they are supposed to be writing about? Forget the day to day plot developments in this and every other soap opera on television and consider instead the * representations of people and culture and the * ideologies expressed by the producers within the programme. * How realistic is their interpretation of community in Britain today? * Are the individual characters a fair representation of you and me, your parents, your friends, your neighbours? ...read more.

for feminist ends to satisfy unconscious drives toward female power" 2 I shall demonstrate that Eastenders, as representing popular soap opera in Britain today, not only fits in with the views of Geraghty and Nochimson but that the sub plot of soap scripts has a much deeper ideological agenda. It is in fact anti male. Each scene is littered with disparaging remarks to men or about men, each portrays men as, at best, second class human beings and at worst, as bad, untrustworthy, aggressive and in need of a woman to sort out their problems. Women, on the other hand are infailingly shown as good, kind, loving and trustworthy but nonetheless dominant centres of community and family life. The sub plots may well be no more than the exploitation of appealing to womens' emotional reactions on issues of love, romance and family but it may also be considerably more sinister. Look at how men are represented in this episode for example: * Still: Jim washing bins First: that Men should do all the dirty jobs as and when instructed by a woman - and in this first ...read more.