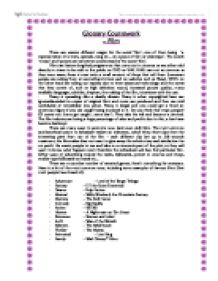 There are various different usages for the word ‘film’, one of them being  ‘a representation of a story, episode, song etc…on a piece of film or videotape’. The words ‘movie’ and ‘picture are sometimes used instead of the word ‘film’.

Films are feature lengthed programmes that come out in cinemas or are either sold directly in stores to be sold to the public on DVD or VHS. VHS’s are not as common as they once were; there is now only a small amount of shops that sell them (numerous people are selling them at second-hand stores and on websites such as Ebay). DVD’s on the other hand are selling out rapidly due to their advanced technology and the extras that they consist of, such as high definition sound, increased picture quality, many available languages, subtitles, chapters, the making of the film, interviews with the cast.

Piracy is spreading...like a deadly disease. Piracy is when copyrighted laws are ignored/avoided so copies of original films and music are produced and then are sold worldwide at remarkably low prices. Piracy is illegal and you could get a fined an enormous figure if you are caught being involved in it. Do you think that stops people? Of course not. Some get caught…some don’t. They take the risk and become a criminal. The film industry are losing a huge percentage of sales and profits due to this, a few have become bankrupt.

There are many ways to promote new (and even old) films. The most common and beneficial way is to broadcast trailers on television, which show short clips from the interesting parts from out of the film – each different clip last up to 5/6 seconds maximum; the filmmaker does not want to give away the whole story and satisfaction for no profit. He wants people to see and take in a minuscule part of the plot, so they will want to know what happens next; therefore the individuals will buy that particular film. Other ways of advertising include the radio, billboards, posters in cinemas and shops, smaller type billboards on roads etc…

There are a countless number of assorted genres, there’s something for everyone. Here is a list of the most common ones, including some examples of famous films (that most people have heard of).

There are many more…the list is almost never-ending. Different people have a unique combination of films they like to watch…. but hardly no one likes only one single category. A variety is more enjoyable, it keeps you more interested and occupied, if you watched the same category of films all the time you would get a little jaded with them (even if you think you adore them too much).

Many films have follow-ups – trilogies and sequels. This is when the storyline to a specific film is too long to put into just one film, or if the filmmaker wants to show what happens later i.e. after a bit of time.

Music. Sound. Films would be quite a bore if there was no music and/or sound. The music and sound effects help build up tension and atmosphere, without them you wouldn’t feel as if you were involved in the film, which wouldn’t make you want to watch it. Soundtracks are available for some films - not many, but some. Most family films and children’s have soundtracks, such as Lion King, Beauty & the Beast, Mary Poppins, Wizard of Oz etc… Many of them being Walt Disney™ films.

Films play an important part to making the world a better place. They explain about the problems and the negative sides to gang life i.e. drugs, vandalism, jail, police, having your own people (family and friends) against you, homelessness etc… They get you to look into your future to see what and how you will become whatever it is you think you will. Most teenagers get an impression that gang life is cool and fashionable…but after they have watched a film or two that deals with gangs etc they realize that they have been getting the wrong impression. Therefore they will never engage in such dangerous activities that are life threatening and ludicrous.

Films also teach you the valuable lessons in life, which your parents try very hard to explain to you and to make you understand. All realistic films contain at least one moral; with nearly every film you watch you learn an important lesson. These morals will upgrade your present and future life, will tell you how to think…not what to think. Its all up to you in the end, you cannot just do exactly what you see in a film when you are faced with a similar dilemma. No one can ever be confronted with the exact situation, thus you should either make up your own mind using sense/logic or mix and match the problem solving techniques and ideas you have seen in films.

As well as films improving your life they can also deteriorate your living years. Instead of finding gang life foolish, some people may find drugs and being on the run trendy. This will cause their ambition of being similar to the actor (in the film) in the future to greatly boost.

Films have also got the ability to increase or decrease the amount of racism that goes on. Films such as ‘Bend It Like Beckham’, which feature tradition and culture, contain a hint of truth that has been exaggerated ten times over; giving people an over-the-top, false impression of the race – these films are called stereotypes, ‘ethnic stereotypes in popular culture involve an overly simplified, stereotypical or false representation of the typical characteristics of members of an ethnic group’. Ethnic stereotypes cause people (who do not know anybody of the race that is used) to think negatively about them and get the impression that they’re weird and strange. Some teenagers may start calling out random racist remarks, which they have produced and developed from the ideas that they have gathered through stereotypical films.

How many individuals are involved in making a film? Actors, directors, editors, stunt men…a countless number. Hundreds and hundreds of employees are involved and each and every one of them is needed to make the film a success. You may categorize them into two groups – minor and major. But on the whole you couldn’t make a film without the actors, directors, Special Effects Company or even the cleaners…they’re just as important as each other.