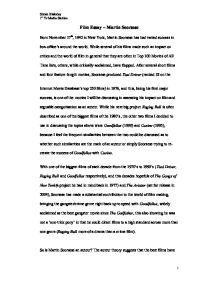 Film Essay - Martin Scorsese Born November 17th, 1942 in New York, Martin Scorsese has had varied success in box-office's around the world. While several of his films made such an impact on critics and the world of film in general that they are often in Top 100 Movies of All Time lists, others, while critically acclaimed, have flopped. After several short films and four feature-length movies, Scorsese produced Taxi Driver (ranked 33 on the Internet Movie Database's top 250 films) in 1976, and this, being his first major success, is one of the movies I will be discussing in assessing his impact on film and arguable categorisation as an auteur. While his next big project Raging Bull is often described as one of the biggest films of the 1980's, the other two films I decided to use in discussing the topics above were Goodfellas (1990) and Casino (1995), because I feel the frequent similarities between the two could be discussed as to whether such similarities are the mark of an auteur or simply Scorsese trying to re- create the success of Goodfellas with Casino. With one of the biggest films of each decade from the 1970's to 1990's (Taxi Driver, Raging Bull and Goodfellas respectively), and this decades hopefuls of The Gangs of New York(a project he had in mind back in 1977) ...read more.

positive contribution to film making to show other directors that shying away from controversy won't always make their films successful, quite the opposite. However the auteur theory also represented that any work of art should symbolise the vision of the artist. Once again Scorsese has films that could represent this, namely a one-man mission to clean up the streets of Manhattan in Taxi Driver and Bringing Out the Dead, and the bringing down of mob empires ruling towns in Goodfellas and Casino. His films always seem to have a somewhat righteous ending, with Ray Liotta's character Henry Hill surviving under the witness protection program after falling into the world of the Mafia at a young age and, in the end, giving up the people and the drug-ridden world he had come to rely on in the process in Goodfellas. Then there is De Niro's Travis Bickle surviving and seeming happy with his work again after saving 12 year old Iris (Jodie Foster) from the world of prostitution in Taxi Driver. De Niro's character in Casino also ends up back where he started after lying and cheating his way into money throughout the film and have it all crumble back around him. Having discussed the positive contributions and auteurist traits within his films, I will now begin to talk about the possible negative contributions and the things in his films that could go against him being described as an auteur. ...read more.

Therefore he can not only introduce fading genres back into the limelight, he can also exceed in genres that are already popular at the time and show other directors that there is more than one way even to make a boxing movie, with him doing a biopic on actual boxer Jake LaMotta and concentrating more on his domestic life than life in the ring, as opposed to the fictional "Rocky Balboa" that focused mainly on his career. However I do believe that Casino was simply an imitation of Goodfellas, perhaps Scorsese trying to regain his crown after the success of Pulp Fiction and Reservoir Dogs. I don't think that the similarities pointed out earlier in the text are examples of him being an auteur in that respect, I think they have the same outline with a different format, simply another way of telling a story about the life of gangsters and what happens to those who get too greedy with it, with the star of the film surviving at the end when everyone else is either dead or in prison. For this and the similarities between Taxi Driver and Bringing out the Dead I don't believe that he can be categorised as an auteur, more of a brilliant director who has had great success with some of his films, but has tried in vein to re-create that success with others. Simon Blakeley 1st Yr Media Studies 1 ...read more.