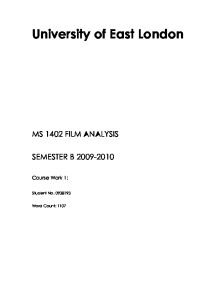 Among the all theories in film analysis, representation and gender can be considered as one of the important theory especially in a film like From Russia with Love (1963) starring by Sean Connery as James Bond which is the second film of the James Bond film series. James Bond film series which is also known as 007 film series can be regarded as one of the most successful film series in the 20th century. It lasts over half an century and has over 20 films with more than 5 starring of James Bond. It based on the novels of Ian Fleming.  Therefore, this essay is going to analysis the representation and gender in the film of From Russia with Love in three parts; introduce the gender theory of analysis psychoanalytic approach and cultural studies approach and the gender theory in psychoanalytic approach and cultural studies approach in the film of From Russia with Love respectively.

Firstly, this essay is going to introduce the gender theory of analysis psychoanalytic approach and cultural studies approach. Psychoanalytic theory suggests man as active while woman is passive while cultural studies approach suggests that the relation between man and woman in the film is more than binary opposition.Masculine is usually known as voyeurism, sadism, action, fetishism and it always control narrative. On the other hand feminineis usually known aspassive, exhibitionism, spectacle, masochism and narcissism.

According to the theory of psychoanalytic approach, man tends to be active and woman tends to be passive. In addition, man leads the gaze and woman is usually as spectacle. The narrative of From Russia with Love is driven by the British agency of James Bond. The entire story in the film is about him and his mission. The female character of Tatiana Romanova and all other female characters in the film tend to be like the spectacle and background of Bond. Compare with other masculine films, there is a significant point of females resigned to the background and spectacle in From Russia with Love and all other series of James Bond film. That is the film always starts James Bond walk to the camera and shoot the camera with his gun, then it comes scenes of sexy females dancing with the subtitles of the producers of the film. That may be a sign to tell the audiences, Bond dominate the narrative of the film and females in this film are just spectacle and background. The character of Bond is so active that even more active than most male characters in other masculine films. That made this film special and also has connection to the film studies theory of stardom. “The phenomenon of stardom provided a useful starting point for thinking about the performative aspects of masculinity in the cinema, perhaps because spectacle, performance, and acting all function as both constitutive components of stardom and significant terms in those writings concerned with the sexual politics of representation.” ( Tasker ,1993 p:223)   When it mentions sexual politics, there is another interesting scene is James Bond have sex with Tatiana Romanova, his aim is totally different from Tatiana’s aim. Tatiana have sex with Bond is because she loves him. Nevertheless, Bond have sex with Tatiana is because of he wants the information to get Lektor in order to complete his mission for his country.

According to the theory of cultural studies approach argues that gender is more complex than binary opposition. In the film of From Russia with Love ,the conversation between Tatiana Romanova and Rosa Klebb in the first appearance of  Romanova was quite interesting, when Klebb asked Romanova about she used to trained for the ballet, she answered  she grew an inch over the regulation height with a proud smile in her face. That can be considered as a form of narcissism for female. Another scene in the film of From Russia with Love is the gun fighting scene in Gypsy camp. Before gun fighting, there was two Gypsy girls dancing (that can be considered as a form of exhibitionism), and then they fight for a man. But when the gun fighting started, it totally turns into a men’s fighting game of guns. After gun fighting, the two Gypsy girls became Bond’s girl and that can be considered as a form of masochism. Gun fighting can be regarded as a competition of power. As Thumim argued, questions of skill, competence and adequacy might loom large in the private assessment of men of themselves and their peers, and power – overtly about the men’s relations.( Thumim, 1995, p:239) In addition, the dubious pleasures of the propitiatory jokes about guns and penises are offered as mask, a cover for a more disturbing model of male sexuality, in the film condoned or even legitimated by spectacularly sexualized violence, one needs a weak partner. ( Thumim, 1995, p:243) That can explain the scene of gun fighting in the film of From Russia with Love .  This also explains the scene of when Bond and Romanova try to return to London with the Lektor. When the fighting scene between Bond and a powerless partner-Red Grant. Romanova was arranged to had hypnotics in her drink and sleeping in the next door when James Bond fight against Red Grant in the train. The fighting between men in the film is also a form of sadism and action.

In conclusion, there are two approaches ofimages of masculinity and feminity in film, psychoanalytic approach and cultural studies approach.  (Nelmes2007, p:265) argued masculinity is associated with voyeurism, action, sadism, fetishism and the controlling narrative while femininity is associated with passivity, exhibitionism, spectacle, masochism and narcissism. In the film of From Russia with love, most of the issues which Nelmes mentioned above emerged. James Bond controlled the narrative and both action and sadism emerged in most of the fighting scenes while the not only the character of Romanova but also all the other female characters were passive in the film and tend to be like the back ground of Bond. Exhibitionism, spectacle, masochism emerged in the scene of Bond in the Gypsy camp. In addition, the narcissism emerged during a conversation between Romanova and Klebb.