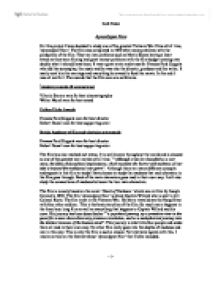 For this project I have decided to study one of the greatest Vietnam War films of all time, 'Apocalypse Now'.

Apocalypse Now For this project I have decided to study one of the greatest Vietnam War films of all time, 'Apocalypse Now'. The film was completed in 1979 after many problems with the production of the film. They ran into problems such as Martin Sheen having a heart attack as they were filming and great money problems with the film budget running over double what it should have been. It was a great strain and stress for Frances Ford Coppola who did the screenplay, the music and he was also the director, producer and the writer. It nearly cost him his marriage and everything he owned to fund the movie. In the end it was all worth it. The awards that the film won are as follows: 1Academy awards (8 nominations) Viltorio Storaro won for best cinematography Walter Murch won for best sound Golden Globe Awards Frances Ford Coppola won for best director Robert Duvall won for best supporting actor British Academy of film and television arts awards Frances Ford Coppola won for best director Robert Duvall won for best supporting actor The film has also reached cult status. It is well known throughout the world and is classed as one of the greatest war movies of all time. 2"Although it can be classified as a war story, the films philosophical implications, which examine the horror and madness of war take it beyond the traditional war genre". Although there are many different concepts and aspects in this film to study I have chosen to study the madness that each character in the film goes through. ...read more.

Mr Clean From the many books I have read about 'Apocalypse Now', none of them have really gone into any depths about the character of Mr Clean. Mr Clean was the third member on the boat and the youngest at seventeen. He was described as 7"Cannon fodder for this war. Rock 'n' rollers with one foot in the grave". He was another solider that didn't belong in the war. He was also very naive. 8When the crew were searching the boat, he opened fire with no good reason and killed two people. He was doing this with his sunglasses on and by the look of his face he was having fun and no real regrets about killing innocent people. Mr Clean was too young, too naive and to stoned to understand the war and the horrors that surrounded it. We do find that his team thought highly of him. The scene when he was killed is a very moving one because he is lying there shot and his mother is talking on a tape in the background saying, 9"Stay out of the way of the bullets". He was also the only character to have a proper funeral. Chief Chief is the captain of the boat and the one who drives it. You could argue that he is the sanest person in the whole film. He doesn't do drugs, he even passes up the chance of having sex with playboy bunnies. He is very serious throughout the film and doesn't let up once. 10He is compassionate as he tries to save the Vietnamese woman aboard the Sampan boat but Captain Willard kills her to save time. ...read more.

Kurtz knows what he did was right but he also knows that no one else would see it that way. All the characters in the boat were young, impressionable people. None of them were soldiers and none of them belonged in the war. With everything they went through it wasn't surprising that they all went mad in their own way. They can't handle the war or cope with the jungle. With Captain Willard it was the army's fault he went insane. They should have known that it could of happened as it happened before when another solider went insane because of the same mission. With Kurtz being such a powerful man able to manipulate people without even knowing it, Captain Willard had no chance. The madness of war was not the only concept in this film. From watching 'Apocalypse Now' a few times other concepts came to me. Frances Ford Coppola seems to want to make a mockery out of America in the war. This is shown by what the soldiers are doing most of the time. They are water skiing, surfing, playing American football, getting drunk and doing drugs. This shows how unprofessional America was in the war and probably why they lost. This is also shown when the man from the French plantation says; "You are fighting the biggest nothing in history". Frances Ford Coppola was very brave to make this film as nothing before like it had been tried. He mixed a Vietnam War film with the horror and madness genre. Other Vietnam War films have been excellent such as 'Full Metal Jacket' and 'Platoon' but non really touched on the depths of madness in the way that 'Apocalypse Now' did. ...read more.