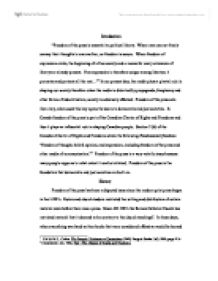 Freedom of the press is essential to political liberty. Where man can not freely convey their thoughts to one another, no freedom is secure.

of the Charter has been infringed. First is whether the expression in issue is within scope of section 2 (b) protection. Therefore if freedom of the press infringes on section 7 of the Charter "Everyone has the right to life, liberty and security of person and the right thereof except in accordance with the principle of fundamental."9 If the answer to this question is yes, then the next part of the analysis involves the question of whether there has been an infringement of the right by a law and whether the infringement of the right of free expression is either justifiable or unacceptable limitation on freedom. The dual nature of this analysis is significant because of the many different interest that must be considered in deciding whether a fundamental freedom as the expression of thought or belief should be restricted in anyway. Limits come in many forms. Some limits apply to all media, other to particular media and still others to individuals communicating on their own. Legislation Limiting Freedom of the Press In some cases it is very important to limit freedom of the press in order to protect society's values. The press is prohibited from printing false information about events or certain subjects. Section 181 Criminal Code: "Everyone who willing publishes a statement, tale or news that he knows is false and that causes or is likely ...read more.

Moreover, the economic, social, political and cultural conditions that are needed for a just exercise of freedom are too often disregarded or violated. Such situations of blindness and injustice injure the moral life and involve the strong as well as the weak in the temptation to sin against charity. By deviating from the moral law man violates his own freedom, becomes imprisoned within himself, disrupts neighborly fellowship, and rebels against divine truth."15 This citation from the catechism of the Catholic Church regards that freedom is essential, However the Church understands that freedom is often "disregarded or violated." Freedom of the press is moral in nature but through mans intervention it can become immoral and corrupt. Conclusion Freedom of the press is vital to ensure a free and democratic society. Man is influenced greatly by what he sees and reads therefore freedom of the press shapes society immensely. Canada has assembled legislation in order to regulate the press. This legislation protects the rights of individuals in our society. Freedom of the press is the key to a democratic country. Democracy flourishes when the press is free and without propaganda. The Catholic Church states that "Freedom makes man responsible for his acts to the extent that they are voluntary."16 This is also true for freedom of the press, man is responsible for what he writes because he chooses his truths. ...read more.