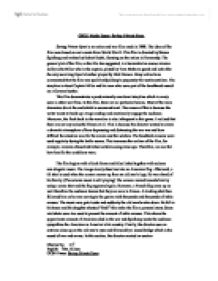 GSCE Media Essay: Saving Private Ryan Saving Private Ryan is an action and war film made in 1998. The ideas of the film were based on real events from World War II. This film is directed by Steven Spielberg and written by Robert Rodat, focusing on the action in Normandy. The general plot of the film, as the title has suggested, is a humanitarian rescue mission led by John Miller who is the captain, played by Tom Hanks to guard and look after the only surviving Ryan's brother played by Matt Damon. Many critics have commented that the film was spoilt by Spielberg's propensity for sentimentalism. The storyline is about Captain Miller and his men who were part of the beachhead assault on a German bunker. This film demonstrates a predominantly emotional storyline which is rarely seen in other war films. In this film, there are no particular heroes. Most of the main characters die at the end which is unconventional. The reason of this is because the writer wants to build up a tragic ending and emotionally engage the audience. Moreover, the flash back in the narrative is also infrequent in this genre. I realised that there are not any colourful frames at all. This is because the director wanted to create a dramatic atmosphere of how depressing and distressing the war was and how difficult the situation was for the armies and the soldiers. The handheld cameras were used regularly during the battle scenes. ...read more.

Soldiers under water were captured on film through the diegetic sound such as grenades, bombs, landmines and bullets. Moreover, a lot of handheld shots are used here to make actions more realistic as we ourselves think we are making our way up to the beach. After that, lots of moments of horror are shown and a point of view of the German machine gunner comes up again. I think this shot is repeated because Spielberg wants to emphasise the carnage and slaughter on the beach and the disorientation of soldiers. Also, it depicts the utter slaughter that American face the hopeless nature of their advance. Finally, this scene ended with some kind of water logging sound and we slowly close up to Tom Hanks' face with another muted moments of horror. He looks quite confusing and he is a bit shocked. I realise that this scene's ending was similar to the first scene which is quite different from other war films. Overall, this scene has a lot of sound effects to build up the atmosphere of horror and the sense of war such as piercing sound of bullets, explosions, bullets hitting metals, orders and sounds of motors on the troop carriers. The combination of all these sounds made this film more attractive and thrilling. In addition, various perspectives give an overview of the carnage. For example, the German perspective suggests the Americans were fighting a lost cause, the mission was immensely difficult and hopeless. ...read more.

This tempts the audience to check out what is actually going on. To conclude, I think Spielberg has built up an awesome and realistic opening sequence. However, I don't think the opening sequence has prepared the audience for what followed because at last the camera zoomed up to the dead S. Ryan, which has confused us, the audience as the aim of the film is saving Private Ryan. But the opening battle scene was really realistic and shocking. Spielberg has broken the convention of traditional war films. He creates a personal and emotional story by flashing back to Ryan's memory of the war. Moreover, a wide range of soldiers are depicted as cowards as well as typical heroes like Tom Hanks and Tom Sizemore. Overall, I think this film is brilliantly acted because of the ways the actors act and the atmosphere that the director creates. The actors clearly indicate how frightened and fearful they were and this educates and informs the audience that millions of innocent lives were lost unnecessarily. In this film, Spielberg builds up a complex plot and he sets up a lot of enigma codes to fool and construct confusions the audience. In addition, a lot of different film languages techniques and ground breaking effects are used to create realism. For example, in this opening sequence, handheld shots, point of view shots and close up shots are used regularly. Also, atmosphere of war has been constructed greatly by astonishing sound. The colour of the film is always dark and dull as well, it represents the hopelessness of war. ?? ?? ?? ?? Charles Ng L54 English Mrs. Ellison GCSE Essay: Saving Private Ryan ...read more.