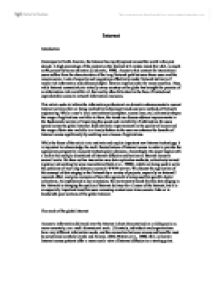 History of the Internet.

Internet Introduction Developed in North America, the Internet has rapidly spread around the world in the past decade. A high percentage of the content on the Internet still resides inside the USA, as much as 80 percent by some estimates (Liebowitz, 1998). Access to this content for international users suffers from the characteristics of the long Network path between these users and the remote server. Lack of capacity and long delays effectively render Network delivery of media-rich information and advanced digital libraries impracticable for many countries. Thus, while Internet connectivity to virtually every country on the globe has brought the promise of an information-rich world for all, that reality often falls short in the face of limited and unpredictable access to network information resources. This article seeks to inform the information professional on dramatic enhancements to current Internet services that are being enabled by technology trends and new methods of Network engineering. While a user's local environment (computer, access lines, etc.) ultimately shapes the range of applications available to them, the trends we discuss address improvements in the fundamental service of improving the speed and availability of information for users spread across the global Internet. Such dramatic improvements in the quality of access and the range of data sets available in a timely fashion to the user can enhance the benefits of Internet access significantly by enabling new classes of applications. While the focus of the article is to motivate and explain important new Internet technology, it is important to acknowledge the multi-faceted nature of Internet access in order to provide the appropriate perspective on purely technological advances. Accordingly, the paper begins with a look at the multiple dimensions of Internet diffusion and barriers to Internet access at several levels. We then outline innovative new data replication methods, collectively termed logistical networking by some researchers (Beck et al., 1999b), which are being used to solve the problems of very long distance access to WWW servers. ...read more.

DWDM is a technology to allow lasers to use multiple colors of light, instead of the single light pulse used today, at the same time. The effect is to multiply the bandwidth from a single cable many times, for example, by 40 to 120 times for current DWDM hardware. These explosive advances in fundamental technologies for networks and storage systems bode well for content replication schemes that are properly designed to scale up with increasing storage and network capacities. New data replication strategies: the way forward Many projects and new commercial ventures are positioning themselves to leverage the opportunities afforded by the trends in mass storage and high-speed networks discussed above. Below we discuss a few commercial efforts and a high-profile academic project within the Internet2 project within the USA. Again, it is important to emphasize that these efforts have different goals (e.g., commercial WWW service versus experimental applications) and different audiences, but the underlying technology solutions are proving to have enormous appeal. In fact, these efforts are already widely deployed and accepted - many Internet engineers believe data replication as envisioned in these new systems has already become the mainstream solution for the Internet going forward. Replicating content within the Network closer to the end-user is not a new idea. It is done today in two ways. So-called WWW caches are computers inside the Network that store the page fetched by a URL so that a later request for the same URL need not travel all the way back to the server. Instead, the cache itself sends the user the saved response. WWW caching has been deployed for some time in the Internet and continues to be an important way that Internet access can be improved (Iyengar and Challenger, 1997; Rodriguez et al., 1999). For example, many countries have a hierarchy of caches, e.g. in the JANET project in the UK[3]. The effectiveness of caching, however, is limited by several well-understood factors. ...read more.

Advanced publication services will eventually offer additional control over publication such as the expiration of access based on timestamps that goes well beyond that of conventional mirrors[9] (Zhu et al., 1999). Control of the data publication mechanisms is a key aspect of the distributed server architecture of I2-DSI and similar approaches since it can be very attractive to organizations or distributed communities interested in building up specialized digital collections through a managed publication effort. Conclusion Performance challenges in delivering rich digital media and large data sets are limiting the feasibility and utility of Internet delivery for many users, especially those outside of North America. This paper has provided an overview of key technology advances that are changing the performance characteristics of time-sensitive and performance-challenged data sets for users in both the commodity Internet and the high-speed Internet2. The mechanisms for intelligent staging of content in the Network for localized use has enormous potential for all Internet participants, but especially for international users suffering from the delay and bandwidth constraints of long Network paths between them and WWW servers. By enabling the aggregation and localized distribution of rich digital collections through managed publication interfaces, these new data replication schemes are poised to change the content experience available to commodity Internet users everywhere. We believe that part of the lesson of the Internet has been the explosive innovation that results from new technological capabilities. Just so, the ability to aggregate large databases and utilize rich media will galvanize new projects for bandwidth-poor areas of the global network, possibly unleashing new global-scale applications that have previously been overlooked. While this may be the optimist's view, it is undeniably true that performance enhancements in Internet delivery capabilities will be one part of the puzzle, along with evolving solutions for the political, economic, and cultural dimensions of Internet diffusion, that will greatly enhance the use and usefulness of networked information technology around the world in the coming years. Notes http://www.approx.ch/freeisp.html http://www.glreach.com/globstats/ http://wwwcache.ja.net/ http://www.akamai.com/ http://www.i-drive.com/ http://dsi.internet2.edu/ http://highmpeg.dsi.internet2.edu/ http://openvideo.dsi.internet2.edu/ http://directory.google. ...read more.