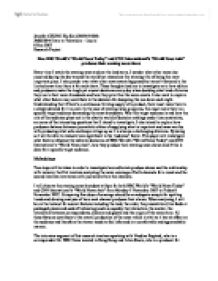 Jennifer CHUNG Hiu Kei (2005654208) JMSC0046 Intro to Television - Laurie 9 Dec 2007 Research Project How BBC World's "World News Today" and CNN International's "World News Asia" produces their evening news shows Every time I watch the evening news and see the lead story, I wonder what other news also occurred during the day around the world but missed out the winning title of being the most important piece. I also ponder over what other news events happened but weren't featured in the limited news time there is for each show. These thoughts lead me to investigate as to how editors and producers make the tough yet crucial decisions every day when deciding what kind of stories they run in their news broadcasts and how they prioritize the news events. I also want to explore what other factors may contribute to the decision for designing the run down each night. Understanding that if there's a continuous thriving supply of a product, there must mean there is a steady demand for it as well. In the case of evening news programs, this must mean there is a specific target audience demanding the news broadcasts. Who this target audience is and how the role of the audience plays out in the chaotic world of decision makings under time constraints, are some of the interesting questions that I intend to investigate. I also intend to explore how producers balance between journalistic ethics of supplying what is important and news worthy with producing what sells and keeps ratings up as it is always a challenging dilemma. By doing so I will be able to evaluate how significant is the 'audience' factor. This paper will investigate what factors influence the editorial decisions of BBC World's "World News Today" and CNN International's "World News Asia", how they produce their evening news shows and if this is done for a specific target audience. ...read more.

Georgia's stabling from state of emergency 16. Sports News 17. Glasgow celebrates hosting right of Commonwealth Games 2014 18. Hollywood's writer strike joined by stars 19. Merck Settlement to resolve Vioxx cases No. of L: 3 No. of Pkg: 11 No. of G: 2 No. of N: 12 BP No. of R: 4 No. of Intl: 8 1 male anchor Some interaction during transition of stories (B) Interviews BBC World CNN International Target audience * Compete with CNN mainly on viewers * Mission isn't commercial so different responsibility so don't have a specific set target audience * Consider a larger Indian and Pakistani audience * editorial tries not to think about target audience but just goes for whatever is visually good/interesting story * goes for the Asian viewers who want English/Intl news in general (little research done on where specific viewers crowd around) * Foreign business travelers Guide or hurt coverage * don't agree on making superficial news when making news * viewers are very lazy/don't have time nowadays --> spoonfed handy dandy news * need to consider if news is out to inform (audience guided) or educate (no audience) * targeting = marketing --> thinking of what sells is not his job to consider: he goes for what is news valuable but marketers will try to suggest a specific direction Compared to the competition * main competitor is CNN so do compare * increasing trend of breaking news running extensively instead of previously on news bulletin (negative consequence of copying CNN's style) * CNN commercial and BBC being PBS --> more resources/bureaus on hand so hard to compare in quality and quantity * BBC has advantage of having radio network and situated everywhere to broadcast whereas CNN concentrates on various places around the world Serious vs sensational * serious: old fashioned, but better * American network --> more resources placed on news revolving around US, whether they are interesting/real news worthy or not are another matter Interaction * bad --> keep it straight rather than encouraging celebrity culture of news anchor (bad for journalism content) ...read more.

Despite the opposing differences in its approach and goals for producing evening news shows, the choices made when producing a show are quite similar. The audience that views BBC World and CNN International are generally the same, native English speakers and both stations take into an account that the audience does become a factor when making editorial board decisions but attempt to not let it interfere too much to compromise the news worthiness or quality of the news show. There are also other factors at play which contribute to the decisions made such as the importance of a major story in its most visually presentable state and for BBC World, the time zones and the amount of money available to produce shows and therefore resulting in the usage of live feeds more than packaged pieces. All these factors influence the choice on which story will lead the show, but the weight of the news value in the story is the most prominent determining factor. These factors were reflected in the choice of stories aired in both channels from the week sampled although BBC World did generally air more international stories for the remainder of its show whereas CNN International often balanced the number of stories between regional coverage and international events. Evaluation Upon reflection, I realized I should have sampled the news coverage on a different week since the state of emergency in Pakistan meant that the focus was continuously around the turmoil and so there wasn't a clear comparison with how different stations choose their lead stories on less stressful days. It would have been interesting to see if BBC World would have done any regional stories if there was not martial law imposed since all their regional stories were on Pakistan. However, there is no way to forecast whether or not a major crisis somewhere in the world is going to break out so there is no systematic way to avoid an issue like this to ensure a better set of sampled tapes. [2389 words] Excluding Data Collection ...read more.