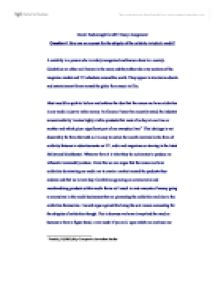 How can we account for the ubiquity of the celebrity in today's media? A celebrity is a person who is widely recognized and known about in a society.

Daniel Burborough Com911 Essay Assignment Question 4: How can we account for the ubiquity of the celebrity in today's media? A celebrity is a person who is widely recognized and known about in a society. Celebrities are often well-known in the news and they often take over sections of the magazine market and TV schedules around the world. They appear in television adverts and entertainment forms around the globe from music to film. Most would be quick to believe and enforce the idea that the reason we have celebrities in our media is just to make money. As Graeme Turner has recently noted, the industry around celebrity 'creates highly visible products that most of us buy at one time or another and which play a significant part of our everyday lives'1 This ideology is not discernibly far from the truth as it is easy to notice the wealth involved in the form of celebrity features in advertisements on TV, radio and magazines or starring in the latest Hollywood blockbuster. Whatever form it is what they do culminates to produce an influential commodity culture. ...read more.

We can look at this from the view of celebrities in the news. This is often perceived negatively as the news media turns becomes entertainment exposing private affairs for the sake of amusement. A critical claim here is that 'the media's focal point on the lives of famous individuals is a move away from issues deemed of public interest'3. Bob Franklin exemplifies this viewpoint when he writes that today, 'the intimate relations of celebrities from soap operas, the world of sport or the royal family are judged more "newsworthy" than the reporting of significant issues and events of international standing.'4. I agree with this statement, as far as stories regarding celebrities are often deemed news items, but I disagree with the context it is being implied. Bob Franklin is using his example negatively, suggesting that the celebrities in the news are not newsworthy or public interest. I would argue and suggest that celebrities are shown in this way in the media, and this example the news, to fulfil a human desire for relationships. Celebrities offer us a chance to escape our own lives. ...read more.

They create a huge commodity around themselves making vast amounts of money through them being them and the products or media that offspring's from them. I agree with this as it is clearly evident but I remind that do not agree entirely with it being the reason we have them. Their earnings only affect themselves and the people they interact with and not the everyday public that is viewing them. Money is only something that comes about from being a celebrity not the reason why we have them as a celebrity. They are there because we put them there and because they can offer something to us. This is, as shown, the idea that we use our celebrities to forge our own identities in life and then we rely on these celebrities to offer us something in return such as entertainment or relationships. This means that now footballers and fraudsters, pop singers and soft porn stars can all be lumped together and f�ted as celebrities if we choose them to be. We have created them through our needs and now it will be a never ending circle. The underlying truth is that these celebrities have appeal because they stand for "cool community metaphors," making simple wealth, and immediate fame. ...read more.