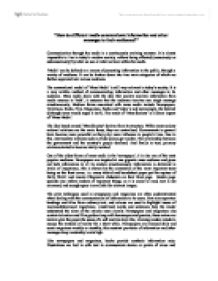 &quot;How do different media communicate information and other messages to their audiences?&quot;

"How do different media communicate information and other messages to their audiences?" Communication through the media is a continuously evolving monster. It is almost impossible to live in today's modern society, without being affected (consciously or subconsciously) by what we see or what we hear within the media. 'Media' can be defined as a means of presenting information to the public, through a variety of mediums. It can be broken down into two main categories of which are further separated into various mediums. The conventional model of 'Mass Media' is still very relevant in today's society. It is a very reliable method of communicating information and other messages to its audience. Mass media deals with the idea that society receives information from media sources in 'bulk', it assumes that the audience receives one single message simultaneously. Medium forms associated with mass media include Newspapers, Television, Radio, Film, Magazines, Books and Video's and increasingly, the Internet (although some would argue it isn't). The result of 'Mass Society' is a direct impact of 'Mass Media'. The idea based around 'Mass Society' derives from its structure. Within mass society national relations are the main focus, they are centralised. ...read more.

Human's find it is easier to remember pictures and sounds in comparison to words only. Also, certain things on T.V influence other mediums e.g. books written on the soap 'East Enders' and radio interviews with film stars. Advertisements are a very reliable way of communication. They are designed to give enough information for the viewer to feel they need the product rather then want it. On T.V., adverts have different slots in order to reach their desired potential buyer. Television has different audience's, e.g. the children and adults, the sports viewer and the outgoer, and ads have been set up to communicate the most relevant information to each audience. For example, on Saturday morning's adverts selling toys are broadcasted, because children are not at school and are up for the cartoon slots in the morning. Beer adverts are constantly found on the football ground, whether it be the players football strip or on watching 'the Carling Premiership' on their T.V. Through advertisements, people are urged to go and see the latest movie either in the cinema or on video. These two mediums are features of the mass media. ...read more.

Interactive TV works by the user at home having a digital remote. These send information to a large server at the company. Programmes/films (information) are stored on 'disks' on a larger machine, which allows us to jump from programme to programme when we want. The 'Set Top Box' above the TV then decodes the received signal and turns it into the chosen programme. These are the main way's in which different media communicate information and other messages to their audiences. Both 'mass' and 'new' media have their own characteristics. Mass Media communication deals with large audiences, with the idea that media are public, open, unrestricted and easy to gain access to i.e. newspaper, radio etc. The audience are thought to be 'Heterogeneous' with no limitations, as one message goes out to everyone at the same time. The audience has an impersonal communication relationship with mass media. The mass audience is a uniquely modern collectively. 'New media' is based around 'interactivity' (Cultural Implications of ICT). Users get 'involved' and influence processes. This is an example of an asynchronous mode, as the user is able to obtain information when desired. Demassification allows personalised options to become available. The new 'digital' age allows the manipulation of things to become easier, while multimedia integrates the various media forms. ...read more.