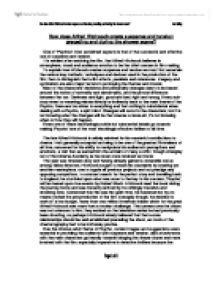 How does Alfred Hitchcock create suspense and tension preceding and during the shower scene?

How does Alfred Hitchcock create suspense and tension preceding and during the shower scene? One of 'Psychos' most acclaimed aspects is that of the successful and effective use of suspense and tension. It is evident after watching the film, that Alfred Hitchcock believes in atmosphere, mood and audience emotion to be the chief concern in film making. To explain how Hitchcock creates suspense and tension we must first ascertain the various key methods, techniques and devices used in the production of the film; then to distinguish the in-film effects, parallels and references. Imagery and symbolism are also major factors in portraying the themes and morals. Most of the characters' decisions and personality changes seem to be based around the notion of normality and abnormality, and the pivotal difference between the two. Darkness and light, good and bad, right and wrong. Every sub-story event or meaning relates directly or indirectly back to the main theme of the Psycho; there are two sides to everything and that nothing is coincidental when dealing with a Psycho, a split mind. Changes will occur in the characters; but it is not knowing what the changes will be that creates a tense air, it's not knowing when or how they will happen. Every one of these fascinatingly subtle but substantial details go towards making 'Psycho' one of the most shockingly effective thrillers of all time. The late Alfred Hitchcock is widely admired for his masterful contributions to cinema. He's generally accepted as being to be one of the greatest filmmakers of all time; renowned for his ability to manipulate his audience's perceptions and emotions, a trait that as earned him the acclaim of many a critic, though strangley not of the Cinema Academy as he never once received an Oscar. The year was nineteen sixty and having already gained a venerable status among fellow directors, Hitchcock sought to retain his standards by creating yet another masterpiece, one to topple all previous projects and out prestige any opposing competitors. ...read more.

The dreamy music ceases as they decide to part, the window is uncovered and light floods back into the room and we're hit y the blinding brightness real world. As in the opening credits, lighting plays an important role in portraying to the audience the specific mood and state of mind the certain character is in at that time; now light and dark represent reality an surreality. The real world is shown to be light because it is full of truth and certainty, but each of Marian's worlds and strange places are dark to show that she doesn't know where she is going, and she's maybe fooling herself in thinking that she'll be able to get through the darkness. The lover's stolen moment is over. We proceed to Marian's place of work, here there is no music, so no particular emotions need to be represented, just to prove that this is the norm and everything is regular. The pace, as to be expected in a place of work, is relatively quick and the characters say only what they need to say. We're introduced to Marian's boss Mr. Cassidy, an ignorant, selfish man constantly boasting about his comparatively abundant amount of money. His tone is imperious and over powering, he belittles Marian making us feel less fondly towards him as we have a prestablished connection with Marian. He mentions how he only carries around the amount cash he can afford to lose, so when he asks Marian to deliver a certain $40, 000, exactly the kind of miracle Marian and Sam need to run away together with, the audience has a rush of longing towards Marian, willing her to take the money because she needs it so much more than Mr Cassidy ever will; plus it would be an entertainment on our part to see him suffer, someone who has purposely be cruel to our Marian. ...read more.

so he hastly leaves saying that she should just knock if she wants anything; this again reminding us of how close he is to Marian and how easily her room could be infiltrated. Before he does leave though, he kindly asks Marian to join him to dinner, the light hearted invitation is accepted by Marian mostly out of politeness but partly because of her lack of company; the audience rekindle a few more flames of doubt towards Norman as he constantly seems to be bringing Marian closer and closer to him. Once Marian is alone, she starts to worry about the money and where to hide it, portrayed by edgy nervous music. Again we see a mirror in this room symbolising that this is Marians darker side but because of our attatchment we continue not to think that it's a bad thing she's doing. Just as she cleverly hides the money in a roll of news paper the music stops and we hear a conversation coming from the house. The storm fades away and we're left with the harsh, unreasonable protests of Norman's mother, tension is created as we hear that she strongly disagrees with having a woman staying in the Motel, this puts pressure on Marian because this would make her feel more intrussive and unwanted less like a guest. Marian's feelings of discomfort and guilt are shared by us, although she didn't open the window herself it still feels as if she's eves dropping. The audience starts to think about maybe this not being the best place for Marian to be right now as she's tryig to lie low, and that so far, with the strangeness of Norman and his mother, nothing but more hardship and struggles are yet to come. Starting with spending an awkward meal with Norman because quite clearly, from the conversation we hear, his mother does not approve. How does Alfred Hitchcock create suspense and tension preceding and during the shower scene? Joe Ralley Page 1 of 12 ...read more.