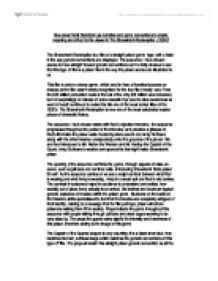 How does Frank Darabont use narrative and genre conventions to create meaning and effect for the viewer in The Shawshank Redemption (1994)?

How does Frank Darabont use narrative and genre conventions to create meaning and effect for the viewer in The Shawshank Redemption (1994)?

This film is under a drama genre, which was far from a theatrical success on release as the film wasn’t widely recognised for the true film it really was. From the $25 million production costs at the box office only $18 million was redeemed, but not surprisingly on release of video cassette it proved to raise awareness as word of mouth continued to make this film one of the most rented titles of the 1990’s. The Shawshank Redemption is now one of the most celebrated master pieces of cinematic history.

The sequence I have chosen starts with Red’s rejection interview, the sequence progresses throughout the period of the interview and provides a glimpse of Red’s life inside the prison walls. Suddenly sirens sound and Andy Dufresne along with the other inmates unexpectedly enter the grounds of the prison. We are then introduced to Mr. Norton the Warden and Mr. Hadley the Captain of the Guard; Andy Dufresne is washed and spends his first night inside Shawshank prison.

The opening of the sequence confirms the genre, through aspects of mise-en-scene, such as jail bars and confined cells, introducing Shawshank State prison it’s self. As the sequence carries on we see a major contrast between what Red is wearing and what Andy is wearing. Andy in a smart suit and Red in old denims. The contrast in costumes helps the audience to understand and realise, how socially out of place Andy actually is on arrival. Old denims and boots are typical generic costumes of inmates within the prison genre. Numbers on the backs of the inmate’s shirts symbolises the fact that the inmates are completely stripped of their identity, relating to a message that the film portrays; prison will reform prisoners making them fit for society. Props indicate the genre throughout this sequence with people talking through jail bars and steel cages seeming to be very close by. The props the guards carry signify the intensity and harshness of this prison, therefore adding to the image of this genre.

The Captain of the Guards weapon is very daunting; it is a black short club that matches his hard, ruthless image which matches the generic conventions of this type off film. The props all match this straight prison generic convention as all the furniture is very dull, plain, feeble looking and old fashioned along with the dark dingy buildings. The clothing the guards wear such as there hats with small metal stars makes them of a high status, placing a feeling of powerlessness over the audience when they are around. Forcing the audience to relate with the prisoners, in the way that they also have no power when the guards are around

The sequence meets the audience’s expectations as it uses the theme of conflict shown through the binary opposition of good versus evil, with the prison establishment consuming the idea. However in keeping with other prison films such as The Green Mile the sequence introduces themes of faith, friendship, loyalty and survival.

This film does repeat some of the expected element of the genres repertoire, every scene in the sequence gives off the prison effect in a very powerful way. Andy Dufresne being sent to jail for something he was innocent of is also a familiar theme in this type of genres repertoire. Darabont uses characters types familiar to this type of genre, they follow the generic conventions set by prison films, and these are the type to keep themselves to themselves and only speak when necessary. Character types are characters within the film who play a particular role, such as Andy Dufresne as the innocent prisoner, along with other types such as the wise prisoner like Red. The brutal guard is another character type, portrayed in many prison genre films.

Prison films tend to have mainstream stars, meaning this could follow generic conventions such as Tom Hanks in “The Green Mile.”

The locations follow generic conventions, outside of the prison in the grounds there is a large, empty, muddy, waterless, sandy expanse for the prisoners to roam in.  The décor of the prison and the cells are dark, old fashioned, grotty and very bare. Bare metal, dark grey window frames, heavy flights of stairs, bare piping and secured, cage like balconies are all generic conventions of the prison genre. Inside the cells, chains are visible, the plasterworks unprofessionally finished and a small dirty basins shown as the generic conventions used to create meaning and effect. The locations travel from outside in the main grounds, to inside, to a dark hall, then showers and finally the cells again. There are no bright colours in the prison, emphasising the fact that this is a dull place which society reforms those within.

This sequence is situated within the exposition stage of the narrative, functioning as an introduction to the location and characters included in the film. This part of the story helps to set up characters and their functions, like with Red explaining him self as the man who can get you anything you need. Red’s functions lead on from this part of the narrative through out the film.

The narrative is linear following a cause and direct structure. Time is ordered chronologically and narrative information is given through dialogue. The viewer is presented with an enigma whether Andy is innocent or not in the opening sequence, subsequently holding their interest. Flashbacks’ showing the night his wife was murdered slightly disrupts the linearity.

This sequence is all about the establishing equilibrium, about Andy’s sentence, when he is placed in jail where nothing has gone wrong for him in there so far. All is in a balance, and only things can go from bad to worse for Andy. This film gives off hidden messages to the public such as that the criminal justice system is not always accurate and people are treated unjustly.

The textual schema in this sequence signifies that time travels slowly and the days are long for the inmates of Shawshank prison. Cross cutting occurs from each different time scene, such as from where they are in the grounds of Shawshank to the time they are being washed, or from the courtroom to the start of the sequence in the jail where the film shows the picture of jail bars to cross cut between the two time events.  The events leading through this sequence are pushed along by the casual characters, including time.