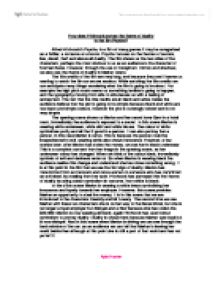 How does Hitchcock portray the theme of duality in the film Psycho? Alfred Hitchcock's Psycho, is a film of many genres it may be categorised as a thriller,

How does Hitchcock portray the theme of duality in the film Psycho? Alfred Hitchcock's Psycho, is a film of many genres it may be categorised as a thriller, a romance or a horror. Psycho focuses on the themes of secrets, lies, deceit, theft and above all duality. The film shows us the two sides of the characters, perhaps the most obvious to us as an audience is the character of Norman Bates. However, through the use of metaphors: mirrors and shadows, we also see the theme of duality in Marion Crane The title credits of the film are very long, and because they are it leaves us wanting to watch the film as we are anxious. While watching the title credits we can anticipate many things wondering what the film is going to be about. For example the high pitch music warns us something terrible is going to happen, and the typography moving from side to side leaves us with a feeling of entrapment. The fact that the title credits are in black and white makes the audience believe that the plot is going to be simple because black and white are two basic and simple colours, however the plot is cunningly twisted and is not very simple. ...read more.

When Marion enters the Bates Motel we are introduced to a new character, whose duality is a lot more obvious towards the end, however we do not find out until the penultimate scene of the film. This new character is Norman Bates. On the outside Norman seems like an ordinary, shy and well mannered man but on the inside he is eaten up by his mother's death, evil and cunning. Not only is Norman a host, as owner of the Bates Motel, but a killer. He is a son but also a mother, by re-enacting his mother's thoughts and words. Norman is also a man, by his natural state, and a woman, when he pretends to be his mother. Hitchcock uses a variety of ways to portray Norman Bates' duality. On such way is in the parlour scene. Norman is surrounded by sharp and square edges and dim lighting, which is the opposite to Marion, who is surrounded by soft lighting and round picture frames. The shape of a square is cornered and has a specific stop and start point, showing the cut off from one edge to the next. This is a mirror of Norman's life, because he can cut from person to person, from a host to a killer, from himself to his mother. ...read more.

A reason as to why Marion's shadow is so light could be because she is dying as well as her other side. Overall I think that Hitchcock has portrayed the theme of duality through the use of costume and colour symbolism of costume: white representing goodness and innocence and black representing evil and deceitfulness. Shadows and lighting are also used to portray duality, by giving Norman poor lighting and a large shadow Hitchcock has given him a larger secret to hide and a bigger dual side. In the car journey Hitchcock has used weather to portray duality, when Marion leaves her home it is sunny and when she arrives at the Bates Motel the weather is "dirty" and rainy. By giving Marion a new identity when she arrives at the Motel duality is shown and accepted by the character. However, it is probably in the parlour scene where most of the symbols Hitchcock has used to portray duality are shown. The use of furniture, irony, animal imagery and metaphors are used to portray the dual side in both Marion and Norman. By using so many conventions to represent the single yet complex film of duality Alfred Hitchcock has managed to create a film which will grip audiences for many years to come. ?? ?? ?? ?? Ayla Hunter ...read more.