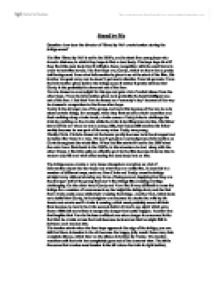 How does the director of 'Stand by Me' create tension during the bridge scene?

Stand by Me Question: how does the director of 'Stand by Me' create tension during the bridge scene? The film 'Stand by Me' is set in the 1950's, and is about four young boys who travel a distance, in which they hope to find a dead body. The boys hope that if they find this dead body that it will give them recognition with the small town in order to look like heroes. The four boys are; Gordy, which we know has a pretty dull background from what information is given to us at the start of the film, His brother has past away and he doesn't get much attention from his parents. From the information given before the bridge scene it makes it pretty obvious that Gordy is the probably the cleverest out of the four. Vern is classed as overweight for his age and gets a lot of verbal abuse from the other boys. From the information given he is probably the least intelligent one out of the four. I feel that Vern is classed as a 'mummy's boy' because of the way he dresses in comparison to the three other boys. Teddy is the stranger one of the group, we know this because of the way he acts about certain things, for example, when they first set off on their excursion and their walking along a train track, a train comes n Teddy tries to challenge the train by walking on the tracks while the train is hurtling towards him. ...read more.

When the camera is zoomed out it shows the boys, Gordy and Vern running along the dangerous bridge away from the train, which it getting closer and closer by the second. Chris and Teddy made it across the bridge fine because they set off a few minuets before Gordy and Vern because; Gordy and Vern were to busy checking if any trains were coming by putting their ears to the rail. This scene has even more tension because the boys Chris and Teddy are shouting Gordy and Vern's names while the train is hurtling right behind them. When Gordy first acknowledges that a train is coming he shouts 'train', but when he says this the camera is focused of Gordy's face and everything is in slow motion making the audience know that there is a lot of action about to take place, which makes the audience far more interested in what is about to happen. When the train is approaching the boys, the camera focuses on Gordy and Vern's legs, which are running at a steady pace so they don't fall through the gaps of the slats on the track. But when the train gets even closer to the boys the camera is still focused on their legs running but, the boys aren't running at a steady pace any more, they are running as fast as they can in order to save their own lives. ...read more.

This created the most tension because Vern was so scared that he didn't want to get up, giving his life away in a way but Gordy's ambition was far from letting his friend die like this. Gordy helped Vern up and stayed with him right until they got far enough along the bright to jump off were it wasn't that high and the train flew past them. When Vern is wasting all the time in the bridge scene the viewers immediately think that something bad is about to happen which makes the tension at its highest point. Question: Is the director of stand by me successful in creating tension in the bridge scene? I think the director is very successful in creating tension during the bridge scene. He does it in many of ways, such as, the black train and smoke, Vern wasting time, the sound of only footsteps and no voices etc. The audience respond really well to this scene, they do this because the tension keeps building up during the start of the scene and finally has enough tension to keep you on the edge of your seat whiles watching the film. When the film starts some people could class it as boring, but as soon as the bridge scene takes place the audience who find it boring begin to enjoy the film. I think that the director was highly successful and made the scene very effective and the tension was abdominal for a film that was made decades ago and captured the audiences' attention very well. ...read more.