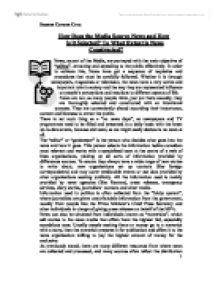 How Does the Media Source News and How is it Selected? To What Extent is News Constructed?

How Does the Media Source News and How is it Selected? To What Extent is News Constructed? News, as part of the Media, are portrayed with the main objective of "selling", attracting and appealing to the public effectively. In order to achieve this, News have got a sequence of requisites and procedures that must be carefully followed. Whether it is through newspapers, magazines or television, the news have a very active and important role in society and the way they are represented influence on people's perceptions and reactions to different aspects of life. News are not, as many people think, just put there casually, they are thoroughly selected and constructed with an intentional purpose. They are conveniently placed according their importance, content and likeness to attract the public. There is not such thing as a "no news days", as newspapers and TV programmes need to be filled and presented in a daily basis with the latest up-to-date events, because old news, as we might easily deduce is no news at all. The "editor" or "gatekeeper" is the person who decides what goes into the news and how it goes. This person selects the information he/she considers most relevant and works with a specialised team at the centre of a web of lines organisations, picking up all sorts of information provided by differences sources. ...read more.

"Never let the truth get in the way of a good story" is a common saying in news rooms. A news organisation establishes its sources of information according to the topics and events it is most likely to cover, which leads the events reported often being interpreted by the source. The relationships built between journalists and its source it's reciprocal; the source provides the information and the journalist publishes it adding prestige and publicity to the source itself. However, although most of the times stories are written uncritically and unintentionally, a journalist may subvert the source and express its personal opinion. News have to be impartial and offer as many sides of a story as they possibly can rather than just quoting verbatim a determinate point of view. They don't want the public to think they are imposing any particular standpoint to them. Instead they provide different viewpoints and opinions, remaining always as neutral as possible. Because of the limited times and space of new programmes and newspapers, the information has got to be carefully selected according to its significance and appeal. When there is too much information to choose from, editors have to priorise stories. So, what is and what isn't newsworthy? The notions of newsworthiness that journalists have are mostly gathered rather from experience and tradition rather than from any kind of formal training. ...read more.

News are also constructed regarding their importance. The editor or gatekeeper will place the news in sequence according to their relevance and probability to attract the public. It is very important to create catchy and smart headlines that are easily understood rather than complex, sophisticated and long sentences that would only confuse the reader and lead them to not buy the newspaper or watch the news programme. Often the accompaniment of a good picture or image speaks more than words, becoming almost essential the presence of a good leading photo in the front page of a newspaper. The rest of the news and in a newspaper are ordered and placed from most to less important, from bigger to smaller or from most interesting to tedious. Summing up, we can come to the conclusion that when writing and editing news, there are a lot of important factors to bear in mind that are essential for the achieving of a successful publication The magnitude, significance and way of portraying a story or event, determinate whether the aims of triumphing among the exigent public and its demands have been fulfilled. The structure of news and its construction are primordial requirements that need to be carefully situated. Susana Corona Cruz 1 ...read more.