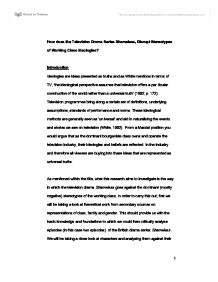 How does the Television Drama Series Shameless, Disrupt Stereotypes of Working Class Ideologies?

How does the Television Drama Series Shameless, Disrupt Stereotypes of Working Class Ideologies? Introduction Ideologies are ideas presented as truths and as White mentions in terms of TV, 'the ideological perspective assumes that television offers a particular construction of the world rather than a universal truth' (1992, p. 172). Television programmes bring along a certain set of definitions, underlying assumptions, standards of performance and norms. These ideological methods are generally seen as 'universal' and aid in naturalising the events and stories we see on television (White, 1992). From a Marxist position you would argue that as the dominant bourgeoisie class owns and operate the television industry, their ideologies and beliefs are reflected in the industry and therefore all viewers are buying into these ideas that are represented as universal truths. As mentioned within the title, what this research aims to investigate is the way in which the television drama Shameless goes against the dominant (mostly negative) stereotypes of the working class. In order to carry this out, first we will be taking a look at theoretical work from secondary sources on representations of class, family and gender. This should provide us with the basic knowledge and foundations to which we could then critically analyse episodes (in this case two episodes) of the British drama series Shameless. We will be taking a close look at characters and analysing them against their function within the family unit. Not only will we be seeing how families go against dominant representations but also how they might offer something new. At this point, it would be worthwhile mentioning what is meant by the term 'working class'. 'Class divisions are established based on who owns and controls the means of production and who labours within it' (White, 1992, p. 164). In other words social class is determined largely by occupation and the working class are identified by their dependence upon manual labour. ...read more.

Daughters in particular grow to be very dependable on their father as they will always remain 'daddy's little girl' and always look to the dad for security and emotional support. Where as sons initially are more emotionally connected to their mums and then as they grow have to break that connection off in order to obtain some sense of masculinity and follow in their fathers footsteps. Analysis of Shameless Shameless, Paul Abbott's creation of a TV series based on a fictional estate in Manchester called Chatsworth Estate represents the disorderly lives of the working class. The Channel 4 television series centres itself on the main character Frank Gallagher and his unruly and dysfunctional family. Frank Gallagher is an unemployed alcoholic single farther and leaves his children in a poverty stricken estate to fend and look after themselves. From this, peoples initial ideas on stereotypes and representations of working class life, fit dominant traditional ideologies. However, Shameless does a good job of disrupting the dominant ideologies of working class, some of which we mentioned in the previous section. Below we will be looking at some of the individual characters and the families as a whole over two episodes (the pilot episode and last episode of series 7) of the TV series. We aim to look at how everyone within the programme works to go against the dominant ideologies of this section of the working class as being how Marx describes it, 'lumpen'. While the Gallagher family and others around them are dysfunctional, chaotic and sometimes cruel, one of the main features that stand out from beginning to end of almost each episode and especially within the pilot is the strong sense of community. Each member of the family stick by each other through the thick and the thin and are very loyal to each other although it may not seem it at first. This large sense of community is so strong you could almost class majority of the people there as living together as one big family. ...read more.

Joe, although not all the time, is looked upon as a villain and betrayer of the community so when Joe attempted to kill Karen after a dispute Ian murdered him in order to save her life and protect her. This in someway shows a moral story in which loyalty and community will always prevail. Just as the pilot episode finished, the last episode finished on the same element of community. When Roscoe, rival gang member and outsider attempts to kill the two of the Maguire children in the pub, the remaining son of the Maguire family, Mickey, manages to steal the guns that were handed in to the police at the pub. These guns were then sneakily passed around to all the characters in the pub and when called for, everyone drew their guns out and pointed them at Roscoe and his gang. Everyone in the community came together to help fellow members of their community, and they succeeded. It is also important to mention that Frank Gallagher also played his part in assisting which was the first time he showed guts and determination to help other members of his community. This was probably the biggest representation of community and positive light in Shameless to date. Conclusion In summary Shameless does a very good job of disrupting the negative stereotypes and stereotypes in general of working class ideologies. 'The series is made in such a way as to be particularly uncomfortable for respectable middle class viewers, involving them in the lives of people who they would never encounter in their own neighbourhoods and challenging conventional assumptions about what constitutes normality and morality' (Morley, 2009, p. 501). Although the lives of families on Shameless are chaotic and dysfunctional, the bonds of loyalty between community and family always prevail to show an aspect of working class life that go against dominant representations and largely tops aspects of respectable middle class society. Shameless deserves credit for encouraging us to think about representations of working class on television in more complex ways (Morley, 2009). ...read more.