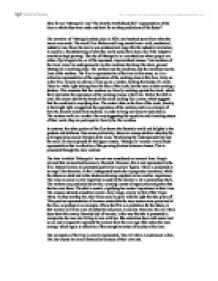 How far are 'Metropolis' and 'The Day the Earth Stood Still' representation of the time in which they were made and how far are they predictions of the future?

How far are ‘Metropolis’ and ‘The Day the Earth Stood Still’ representation of the time in which they were made and how far are they predictions of the future?

The narrative of ‘Metropolis takes place in 2026, one hundred years from when the movie was made. The world Von Harbou and Lang created was a cold, mechanical, industrial one. Since the movie was produced not long after the industrial revolution, it could be a foreshadowing of what the world would have been like if the industrial revolution kept growing. The city of Metropolis is a crowded one where people are either of privileged elite, or of the repressed, impoverished masses. Vast numbers of the lower class live underground to run the machines that keep the above ground Metropolis in working order. The workers run the machines, but the machines run the lives of the workers. The film is representative of the time in this sense, as it is a reflective representation of the oppression of the working class at this time. Early on in the film, viewers are shown a close up on a worker, holding the hands of a clock. There’s a white light shining from the face of the clock, but the man is dark creating a shadow. This connotes that the workers are literally working against the clock, which fully represents the oppression of the working classes at the time. Before the shift is over, the camera shows the hands of the clock looking like a cross, which suggests that the workload is crucifying him. The central shot on the face of the clock, directly at the bright light, exaggerates the oppression of the workers and is an example of how the director selectively mediates, in order to bring our focus to such details.

The workers walk in a zombie-like way suggesting the repetitive and alienating nature of their work; they are portrayed to literally be like zombies.

In contrast, the other portion of the film shows the futuristic world and delights in the gardens and stadiums. One scene particularly, shows an orange stadium whereby the privileged class enjoys Olympic-style races. By showing the Underground City and the main life above ground for the upper classes, ‘Metropolis’ creates a vermilitude representation that is reflective of the growing division between classes. This is presented through the clear contrast.

The time in which ‘Metropolis’ was set was considered an immoral time. People claimed that women had become to liberated. However, this is not represented in the film. Instead women are presented positively as power figures. Maria is presented as an angel-like character. In the Underground scene she is purposely luminated, whilst the others are dark and in the shadows drawing emphasis to her and her importance. The mise-en-scene is very important is used by the director a lot in presenting Maria. The workers are positioned below her, creating a sense of superiority and power that she has over them. The shot is central, signifying her central importance in their lives. The crosses adorned around her create a holy image, similar to that of the Virgin Mary. As they worship her, their faces seem to glow with the light that she gives off. This positive representation of women contradicts the way women were perceived at the time, so perhaps is an example of how the film is a prediction for the future, in that women will have roles of authority and power in society. However, the evil Maria does show this overly liberated side of women, in the way that she is presented to manipulate the men into falling in love with her. She entertains them with music and so on, and is argued to represent the women from the Jazz age. She makes the men corrupt, which again is reflective of the corruptive nature of society at the time.

The corruption of the time is clearly represented. The evil Maria is instrument in this. The city causes its on self destruction because of their own lust.

‘The Day the Earth stood is still’ is very reflective of the time it was set particularly through the fashion. One of the main things that most characterises the 2950s was the strong element of conservatism and anticommunist feeling, which ran throughout much of society. Fifties clothing was very conservative. Men wore grey flannel suits and women wore dresses with pinched waists and high heels. This is made very apparent in the film.

Central to a lot of the narrative of ‘Metropolis’ is the use of technology. Electricity plays a big part in it when it is used to make the evil Maria. A lot of close up shots are used also on the levers, and different machines. This perhaps is an example of how the film predicts that technology, innovation and electricity will be important in the future.

Both films are rather reflective of the era that they were set, irrespective of dates. However, whether they make clear predictions of the future is debatable. A lot of their references to the future are similar and often relate to the far future rather than the contemporary society that we live in now. For this reason, the dew predictions one can identify that each has made, becomes very generic and similar to each other, rather than predicted and presenting new idea of the future.