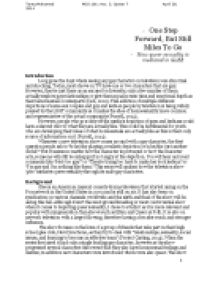 How queer sexuality is mediated in &quot;Glee&quot;.

ï»¿Tareq Mohamed MCS 101: Ass. 3, Option 7 April 28, 2014 * One Step Forward, But Still Miles To Go * How queer sexuality is mediated in GLEE Introduction Long gone the days where seeing any gay character on television was abnormal and shocking. Today, most shows on TV have one or two characters that are gay. However, they’re just there as an excuse for diversity; only a few number of them actually explore gay relationships or give them equal screen time and emotional depth as their heterosexual counterparts (Deb, 2012). This addition of multiple different depictions of same-sex couples and gay and lesbian people by television is being widely praised by the LBGT community as it makes the idea of homosexuality more common and representative of the actual community (Purcell, 2014). However, people who go solely off the media’s depiction of gays and lesbians could have a skewed view of what they are actually like. This could be detrimental for youth who are developing their ideas of what homosexuals are actually like as this is their only source of information on it (Purcell, 2014). Whenever a new television show comes around with a gay character, the first question people ask is “Is he/she playing a realistic depiction or is he/she just another cliché?” But it seems no matter how the character is portrayed or how the character acts, someone will still be unhappy if not angry at the depiction. You will hear and read comments like “He’s too gay!” or “They’re trying too hard to make her look lesbian” or “I’m gay and I’m nothing like them.” This essay will analyze how the television show ‘glee’ mediates queer sexuality through its male gay characters. ...read more.

As a gay teen, Kurt is faced with a number of scenarios that challenge his true identity. In a later episode, named ?Preggers?, Kurt joins the football team in an attempt to show his dad that he is not gay. After returning home from kicking the game winning point, he is shown in the basement of his house applying skin care products in front of a vanity mirror (Preggers, 2009). He finally tell his father that he is gay; however his father admits he has known that Kurt was gay since he was three because he asked for high heels as a birthday gift. This is another gender stereotype, in which girls want dolls and men want cars. Another criticism of homosexual portrayals in the media is of the romantic interests given to the homosexual characters, or lack of. While you can see the heterosexual characters kissing and making out in most episodes, Kurt has no romantic storylines in the first season. The closest he came to it was when he had a crush on Finn, one of the heterosexual leads, and tried to manipulate him to fall in love with him (Hairography, 2009). This depiction also reinforces another key stereotype that?s been used for decades now ? that all gay men are out to ?turn? all straight men. Having said that, the show also depicts Kurt going through many stages that real gay people go through, such as standing up to bullying, coming out to his parent, falling in love, questioning his faith and discovers himself. ...read more.

However he still doesn’t want to come out publically, nether the less he gets outted at his school and someone spray-paints “FAG” across his locker (On My Way , 2012). While he tries running out of the school, the other football jocks bully him and slam him into the lockers. He returns home and tries to hang himself but fails as his father finds him in time. The character also shows that not all gay people are the same cliché. The truth is, there are gay people who are accepted by their families and peers, but there are also those who are scared to embrace who they really are. All these people exist but they have not existed on television, at least not for a long time or targeted at mass audiences (O’Callaghan, 2011). Conclusion Cultures often point to television genre or narrative as a strong influence on sexual identity formation and behavioral choices made by teens, particularly as they grow into emerging adulthood (Davis 2004; Kielwasser and Wolf 1992; Meyer 2003). While the male queer characters represented in Glee are being subjects for textual analysis, it would be interesting to see how audiences make sense of Glee’s representations of queer sexuality and how do these representations impact their own sexual identity (Meyer & Wood, 2013)? In conclusion while Glee’s depiction of queer male sexuality is a step forward, there are still miles to go. And with the show coming to an end next year, who knows when the next time a show with its influence and depiction of a wide range of queer sexualities ever be on television. ...read more.