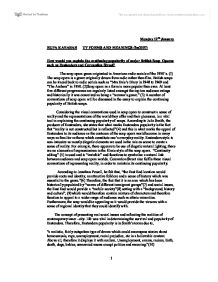 How would you explain the continuing popularity of major British Soap Operas such as Eastenders and Coronation Street?

Monday 12th January RUPA KANABAR TV FORMS AND MEANINGS (fm2007) How would you explain the continuing popularity of major British Soap Operas such as Eastenders and Coronation Street? The soap opera genre originated in American radio serials of the 1930's. (1) The soap opera is a genre originally drawn from radio rather then film. British soaps can be traced back to radio serials such as "Mrs Dale's Diary in 1948 to 1969 and "The Archers" in 1950. (2)Soap opera as a form is more popular then ever. At least five different programmes are regularly listed amongst the top ten audience ratings and historically it was conceived as being a "woman's genre." (3) A number of conventions of soap opera will be discussed in the essay to explain the continuing popularity of British soaps. Considering the visual conventions used in soap opera to construct a sense of reality and the representations of the world they offer and their pleasures, is a vital tool in explaining the continuing popularity of soaps. According to Julia Smith, the producer of Eastenders, she states that what marks Eastenders popularity is the fact that "reality is not constructed but is reflected"(4) and this is what marks the appeal of Eastenders to its audience as the contours of the soap opera world become in many ways as familiar as those which constitute one's everyday reality. Eastenders style is non-intrusive as mostly diegetic elements are used in the mis en scene to create a sense of reality. For example, there appears to be use of diegetic natural lighting, there are no elements of expressionism in the filmic style of the soap opera. "Continuity editing" (5) is used and is "invisible" and functions to symbolise a natural link between audience and soap opera worlds. Coronation Street also fulfils these visual conventions of representing reality, in order to maintain its continuing popularity. According to Jonathan Powell, he felt that, "the East End location would provide roots and identity, an attractive folklore and a sense of history which was essential to the genre."(6) ...read more.

For many people isolated in their homes, soap offers characters the audience can relate to like members of a family and a reassurance that they are not alone in the world. Most viewers admit to forming relationships with soap characters and identifying with individual personalities over a long period of time. In the words of the observer, " for the committed viewer, part of the enjoyment is the assimilation of the fictional world into everyday life...There is special in letting the ephemera of other communities spill into our own homes...Soaps are tailor-made for gossip because of the accessibility of their worlds." (38) However, others debate on this notion of "realism" (39) being illustrated in this particular way. According to James Thurber, the notion of "escapism" (40)is vital in determining a soaps continuing popularity in terms of how realistic they appear to be. Therefore, for many viewers, soap can provide an escape route from a dreary routine existence into a fictional world and therefore "seeks to create the illusion of a reality."(41) Media theorist and Film Studies Professor Richard Dyer also analysed this concept of what he calls "the aesthetics of escape"(42) and suggested in 1997, "escapism" (43) however is an important concept because it acknowledges the limitations and problems of real life and recognises that there are things that we do justifiably need to escape from. In an influential essay called "Entertainment and Utopia" he argues that entertainment, including soap opera, offers, " the image of something better to escape into, or something that we want deeply that our day to day lives don't provide." (44) Therefore, British Soaps according to Dyer present us with the everyday problems that he initiates are the problems that need to be escaped from which are, "Scarcity, Exhaustion, Dreariness, Manipulation and Isolation."(45) The "utopian solutions" or "escapist pleasures" (46) that the soaps provide to these problems in the correct order, in his words are "Abundance, Energy, Intensity, Transparency (honest) ...read more.

(94) Therefore, the appeal is further reinforced as the female villainess character does not illustrate the traditional notion of the "gaze" (95)for the male observer as being passive or nude. The body is presented therefore, quite different from the "bourgeois ego."(96) According to Mary Ellen Brown, "the power of talk in and about soaps as uttererance"(97) also provides pleasure for the women viewers. For example, if a female character does not talk traditionally, this will too subvert the image of a woman and offer pleasure to the female viewer. Gossiping about this amongst other female viewers will too offer them a sense of power in terms of female "solidarity."(98) However, it has been argued that the continuing popularity of the soaps is not due to this but due in Ien Ang words, "the patriarchal status quo remaining intact." (99)Laura Mulvey's 'Visual pleasure and narrative cinema', supports this and argues that still, "a system of visual pleasure is set up according to a particular masculine point of view." (100)Women therefore "receive similar kinds of punishment for their transgressions."(101) For example, Laura in Eastenders is thrown out by her husband Ian. It is this appeal that can be used to explain British soaps continuing popularity with both male and female audiences. In conclusion, the concept of accessibility is vital in explaining the continuing popularity of British soaps such as Eastenders and Coronation Street, in terms of providing the audience with a wide range of characters that they are able to identify with. Also the concept of voyeurism is also a another crucial element in marking the continuing popularity as the audience are able to gain the pleasure of looking into other people's lives without being condemned for it. They also gain the pleasure of observing a heightened version of reality that the soap world offers. The notion of "escapism" (102)and "realism" (103)and the preservation of the "status quo"(104) are also crucial in illustrating a British soaps continuing popularity. WORD COUNT 2178 1 ...read more.