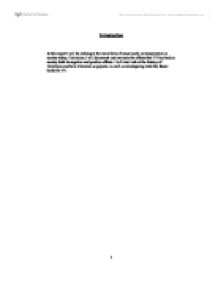 I will be looking at the main form of mass media communication in society today, Television, I will documen

Introduction In this report I will be looking at the main form of mass media communication in society today, Television, I will document and evaluate the effects that TV has had on society both its negative and positive effects. I will also look at the history of Television and how it became so popular, as well as investigating what the future holds for TV. The History of Television The history of television dates back to the 19th century when scientists started to learn how to send communication signals through the air as electromagnetic waves. But it wasn't until 1926 when John Baird showed off his invention at a fanfare in London, this original invention was poor in quality and the picture was grainy however it was an incredible breakthrough in communication technology. Baird went on to develop his idea and in 1927 using the post office telephone lines, he was able to send a television transmission 438 miles from London to Glasgow. In the following year he transmitted images to an amateur radio operator in Hartsdale, New York. It was the first transatlantic demonstration of television. During the late 1920s and 1930s many experimental telecasts took place, the main companies involved in these experiments were The British Broadcasting Corporation (BBC), Central Broadcasting Station (CBS) and National Broadcasting Company (NBC) in the United States. Then in 1936 using Baird's device of transmitting pictures using electric wire, the BBC went on air for the first time. (TV Timeline appendix P14) Television saw major developments during the Second World War for military and surveillance reason, and in the 1950s, technology advanced to a stage where filmed material could be broadcast on television with increasing ease and with improved quality of the picture. The Queens Coronation in 1953 acted as a turning point for television, as this event attracted an increased number of viewers and from then on television was seen as a genuine form of mass medium communication. ...read more.

For example in Britain today Television plays a distinctive role in the social and cultural life of contemporary Britain. It is a forum where the nation speaks for itself, where the different cultures and groups that make up our society can see themselves represented and from which majority obtain information that they require as citizens of this country. "Television brings together cultural groups and raises a level of group consciousness through a distinctive use of language and cultural symbolism" (Ball-Roreach & Cantor, 1986, p. 38). All these things would not have been possible without the invention of television. It is through television medium where a wide range of cultural activities can reach people in their homes. If television was not invented then some social and cultural events might not have occurred, therefore television can be seen as a medium in demonstrating social and cultural significance in today's society. TV and its Negative Effects TV has not been around for that long, however many people have forgotten what it was like without it, some people claim we are nothing but living statues. There are many theories and ideas relating to television and its adverse influence on people and family life. Many say that TV is simply a waste of time, and that it has a negative effect on society. Today many children and adults alike can be found watching television for several hours a day, with some households leaving the TV on all day even if no one is watching it. This is not only harmful to their health producing unfit so called 'couch potatoes' but also has an effect on their work and social life. Some people get so immersed in TV that they fail to communicate with people around them. This often exasperates generation gaps issues, causes family rifts, divorce and many other social problems. Although these problems are serious, the main argument against overuse of television relates to its effect on children and how violence on TV can lead to violence in real life. ...read more.

The opportunity for internet television is an interesting and potentially successful transition, it would be beneficial for both the user and the companies supplying the product, as it would offer lower costs, nearly unlimited capacity, companies can target their key demographic for advertising etc, and it will offer increased interactivity for the viewers. In a time where there are hundreds of channels but nothing really to watch, internet television would help viewers sort through all the channels and programs to view exactly what they want to watch. What this diagram illustrates is that if these two forms of mass communication combine as many experts believe will be the case, then this will form new type of Information Communication Technology, which will offer users more interaction, choice, diversity and entertainment. Conclusion Overall I believe that although there are links and studies that can link violence on television to violence in real life, children can be influenced by what they watch but it is more likely that an aggressive child would be aggressive with or without television and that these children would be potentially aggressive anyway. Also I believe it is the responsibility of the parents and adults in society to educate children from an early age that what they see on television doesn't reflect real life, and make sure they know the difference between right or wrong, and if there is an violent programme on television then the easy thing to do is simply change the channel or turn it off completely. Television may be violent, but it is the decision of the individual person to decide how they act outside the house and in the real world. I believe that television effect on society is hard to define as its invention and progression has been accompanied by many other factors, with along with television have helped to produce a massive social change worldwide. My opinion is that a majority of the viewing public see TV as a good source of education, entertainment and conversation, which has helped the world become more tolerant, respectful and knowledgeable. ...read more.