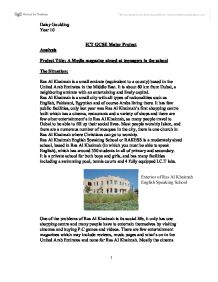 ICT GCSE Major Project : A Media magazine aimed at teenagers in the school

ICT GCSE Major Project Analysis Project Title: A Media magazine aimed at teenagers in the school The Situation: Ras Al Khaimah is a small emirate (equivalent to a county) based in the United Arab Emirates in the Middle East. It is about 80 km from Dubai, a neighboring emirate with an entertaining and lively capital. Ras Al Khaimah is a small city with all types of nationalities such as English, Pakistani, Egyptian and of course Arabs living there. It has few public facilities, only last year was Ras Al Khaimah's first shopping centre built which has a cinema, restaurants and a variety of shops and there are few other entertainment's in Ras Al Khaimah, so many people travel to Dubai to be able to fill up their social lives. Most people worship Islam, and there are a numerous number of mosques in the city, there is one church in Ras Al Khaimah where Christians can go to worship. Ras Al Khaimah English Speaking School or RAKESS is a moderately sized school, based in Ras Al Khaimah (in which you must be able to speak English), which has around 350 students in all of primary and secondary. It is a private school for both boys and girls, and has many facilities including a swimming pool, tennis courts and 4 fully equipped I.C.T labs. One of the problems of Ras Al Khaimah is its social life, it only has one shopping centre and many people have to entertain themselves by visiting cinemas and buying P.C games and videos. There are few entertainment magazines which may include reviews, music pages and what's on in the United Arab Emirates and none for Ras Al Khaimah. Mostly the cinema viewers and people who are interested in that topic are teenagers, and many students would think it would be good if a friendly, local magazine was produced for the school, outlining reviews, and social activities happening to refrain people form going into boredom. ...read more.

Storage of the Existing System: The storage of the existing system is where the information is currently held. As the Rakess Update is now out of use, it is not held on a computer, but there are numerous copies that the school still own and I have got my copy from a student who still collects the Rakess Update. The School Newsletter: After research, I have discovered that the newsletter is produced and developed by Mrs. Simpson before it is distributed each week. She stores it on one computer; so constant transportation does not have to be used, with floppy disks, zip disks etc., which are easy to lose. It is stored in her user area, which is kept safe by a password, which only she has access to. It is kept on Publisher, and is kept in the form of a template so she can just collect the information and put it in the template. The Rakess Update: The Rakess Update, as it was produced differently each term with different layout and content each time, it did not have a special area or safety measure in which it was stored. The Update was made by a group of people, with a different person producing each section, so the person would store the content on their user area, until it was produced and ready for distribution then the work would be deleted and the Update would be produced by a different user with the same methods. Client/User/Public- These are the three main people that will help with the structure of the new system. Client: Ms. Watson is the Headmistress of RAKESS, so I will have to conduct a questionnaire with her, to see if she approves of the new system, and whether she thinks it will benefit the school. User: After considering making a sample magazine then a CD-Rom template to show the user next year, anyone can consider making the magazine next year, which can become re-usable. ...read more.

* I will have to experiment with Publisher and Corel Draw for the kind of layout I want after doing the designing. * I will have to search the Internet and use a digital camera to put a suitable amount of pictures in the magazine. * I will use Front page to produce a web-page and then sign up to a site to promote my web-page. I could attach the web-page to the school web-site. * I could have to use Excel to keep data from surveys and make graphs to show results to help in making of magazine. Storage of the new system: For my project one of the most important things is safety, I am going to have to think of the best ways to keep the new system safe. I am going to try and use one computer as its good for storage as if I keep all my files on one computer then its less likely to get lost and for transportation reasons as I don't have to use floppy disks all the time which are easy to lose and don't have enough space. To keep the system safe on one computer against viruses and unwanted users, I will have to look at different ways at keeping storage safe such as: * Read-only memory is a computer memory that cannot be changed by a program or user. It also keeps the data safe even after the computer has been switched off. * A user area, which I can keep safe with a password so only I can access the data. * Instead of using more then one computer and having to use floppy disks all the time, I will use hard disk on one computer that has a storage capacity much bigger then floppy disks. [R1] [R1] Change this as going to after consideration to make CD - Rom and Website. But do after! After making analysis of CD - Rom and website ?? ?? ?? ?? Daisy Goulding Year 10 1 ...read more.