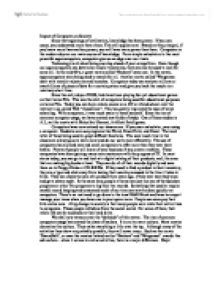 Impact of Computers on Society.

Impact of Computers on Society Since the beginnings of civilization, knowledge has been power. If you can count, you understand more than others. This still applies now. Based on this principal, if you know more than another person, you will have more power than them. Computers in the modern day are our main source of knowledge. From simple calculators to the most powerful supercomputers, computers give us an edge over our rivals Technology is all about being one step ahead of your competition. Even though our supercomputers can determine missile trajectories, they can also be used to look for some oil. In the mid-90's, a great movie called "Hackers" came out. In the movie, supercomputers were being used to search for oil. Another movie called "Wargames: dealt with missile trajectories and launches. Computers today can analyze millions or even billions of pieces of data for a certain pattern and give you back the results in a relatively short time. ...read more.

These companies have been gaining many more customers with the progress of IT. In most stores today, you can go in and look at a digital catalog of their products, well, the ones that are making big bucks at least. They can do all of their records digitally and save them on to Floppy Disks or CD-R/RWs. If they need to find a product in their inventory, they are a type and click away from having their search processed in the time it takes to blink. They can check the sale of a product from years ago, if they ever have bad taxes and get a severe audit. In the same way, people at home can just run one of the Quicken programs or other Tax programs to log their tax records. Something that used to require careful record keeping and consumed much of our time can now be done quickly on computers. There's no real need to go down to the local H&R Block and have tax expert manage your taxes when you have one in your spare room. ...read more.

They then follow their own set of rules and have someone to enforce those rules. This takes the evil act of hacking and makes it a game to see if one can do it or not. Kevin Mitnick was the type person that did not hack for money or anything, yet did hack for the reason "I just got to know." Too bad for him Tsutomu Shimomura was able to track him down. While some people think that hacking is only about the internet, it is not. There is something called cracking and that can be either internet or software based. People will crack programs either for their own need or to help others (at least in their mind). Sometimes they crack programs just so they can see the code to satisfy their own curiosity. While computers have had a large impact on society, the internet has had a global impact. Bringing people together solve problems or to make money. All of this though is based on computers so still acts upon the already altered society. Thanks to computers, society will never be the same. ...read more.