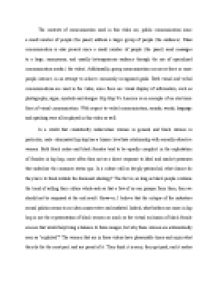 In a world that consistently undervalues women in general and black women in particular, male -dominated hip-hop has a bizarre love/hate relationship with sexually attractive women.

﻿The contexts of communication used in this video are, public communication since a small number of people (the panel) address a larger group of people (the audience). Mass communication is also present since a small number of people (the panel) send messages to a large, anonymous, and usually heterogeneous audience through the use of specialized communication media.( the video). Additionally, group communication occurs as three or more people interact, in an attempt to achieve commonly recognized goals. Both visual and verbal communications are used in the video, since there are visual display of information, such as photography, signs, symbols and designs. Hip Hop Vs America is an example of an electronic form of visual communication. With respect to verbal communication, sounds, words, language and speaking were all employed in this video as well. In a world that consistently undervalues women in general and black women in particular, male -dominated hip-hop has a bizarre love/hate relationship with sexually attractive women. Both black males and black females tend to be equally complicit in the exploitation of females in hip hop, more often than not as a direct response to label and market pressures that underline the consumer status quo. ...read more.

Reflecting on television programming like The Flava of Love, former Source editor-in-chief Kim Osario's sexual harassment ruling and books like the New York Times bestseller Confessions of a Video Vixen, Kitwana adds: "Throughout the last decade, from Congress to the campus center, hip-hop's troubling representation of women is the question that will not go away. This tour hopes to ensure that solutions to this debate go beyond the ivory tower to intervene in the lives of everyday people.? By sharing her emotionally charged story, she hoped to shed light on an otherwise romanticized industry. I cringe at some of the images presented within it, music's portrayal of women and even the violent messages in some of hip-hop's greatest songs. However, the issues of misogyny, violence and homophobia are not hip-hop's issues; they are individuals? issues that are brought to hip-hop. Why are black men being blamed for disrespecting black women? Where does that impulse come from? These women make decisions to be a part of the videos; they are not forced into them. The question that should be asked is, ?Why do women make that choice?? Many of the common persuasive techniques in this video were used, for instance the bandwagon technique where rappers such as T.I and Nelly urged the audience believe something because everyone else does. ...read more.

Television advertisements are a huge source of exposure to persuasion considering the number of hours of television viewed each year. Furthermore, the persuasion techniques were effective because they often make use of loaded words and images. The power of a subliminal message thrives with the help of the deepest part of one's consciousness. It can be in any media and can be taken in visually or through what one hears. The use of subliminal messages in any aspects of our lives is getting wider and wider. Whether such is good or bad is probably up to the person and his own intentions in making use of a subliminal message and trying to influence the people around him. Effective media strategies deliver a uniform message to alleviate the spread of misinformation that often becomes a barrier to understanding or implementation. Strategies can be styled to meet varying levels of interest. Many people rely heavily on the media for information about events, plans, or projects that affect them. The media are an important resource for people; hence it?s popularity and effectiveness. A wide range of effective techniques were used in the video, because of the complexity of the message. ...read more.