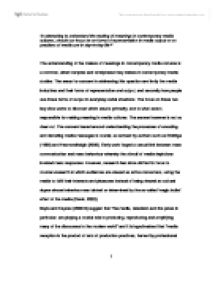 'In attempting to understand the making of meanings in contemporary media cultures, should our focus be on forms of representation in media output or on practices of media use in day-to-day life?'

'In attempting to understand the making of meanings in contemporary media cultures, should our focus be on forms of representation in media output or on practices of media use in day-to-day life?' The understanding of the makers of meanings in contemporary media cultures is a common, albeit complex and omnipresent key debate in contemporary media studies. The areas for concern in addressing this question are firstly the media industries and their forms of representation and output, and secondly how people use those forms of output in everyday social situations. The focus on these two key sites works to discover which area is primarily, and to what extent, responsible for making meaning in media cultures. The answer however is not so clear cut. The concern based around understanding the processes of encoding and decoding media messages is crucial, as echoed by authors such as Eldridge (1993) and Hesmondhalgh (2006). Early work forged a casual link between mass communication and mass behaviour whereby the stimuli of media depictions invoked mass responses. However, research has since shifted its focus to counter-research in which audiences are viewed as active consumers, using the media to fulfil their interests and pleasures instead of being viewed as cultural dupes whose behaviour was tainted or determined by the so-called 'magic bullet' effect of the media (Davis, 2005). Boyle and Haynes (2000:8) suggest that "the media, television and the press in particular, are playing a crucial role in producing, reproducing and amplifying many of the discourses in the modern world" and it is hypothesised that "media reception is the product of sets of production practices, framed by professional ideologies, within the context of institutional structures" (Whannel, 2002: 173). Ideas derived from the work of Antonio Gramsci places an institution, such as the media, in a dominant position of class for which the term 'hegemony' is used to denote this position. Hegemony itself supposes not only political and economical control, but also the ability of the dominant class to project its own ways ...read more.

Morley (1992) added that there is the potential for different individuals or groups to operate different decoding strategies in relation to different topics and different contexts. A person might make 'oppositional' readings of the same material in one context and 'dominant' readings in other contexts. He further noted that in interpreting viewers' readings of mass media texts, attention should be paid not only to the issue of agreement (acceptance/rejection) but to comprehension, relevance and enjoyment (ibid., 1992: 126-127). Further Criticism of Hall's model raises the question; does the preferred meaning actually exist?. Moores (1993:28) asks of the preferred meaning, "Where is it and how do we know if we've found it? Can we be sure we didn't put it there ourselves while we were looking? And can it be found by examining any sort of text?". Moreover, Morley (1981:6) pondered whether it might be the "reading which the analyst is predicting that most members of the audience will produce" and wondered whether the concept may be applied more easily to news and current affairs than to other mass media genres. Based upon the assumption that "widely available communication forms play an important role in mediating society" (Matheson, 2005:1), both Matheson (2005) and Wareing (2004) highlight the potential ability of language to create new meanings and inflict power upon society. The previous discussion regarding the media and violence authors such as Denham (1999) and Matheson (2005) detailed the process by which media discourse and verbal reduction may shape forms of representation and ultimately create meaning and agenda. A conflicting view on media output, specifically related to broadcasting media, may demonstrate how modes of address work to include audiences into discussions rather than positing a direct influence on them, and forms a relationship between the broadcasters and the audience (O'Sullivan et al., 2003). Within media broadcasting both classical and recent work has researched the development of modes of address, the subsequent effects upon media reception and the ways in which modes of address cater for the audiences. ...read more.