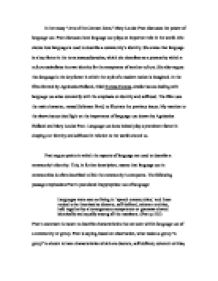 In her essay Arts of the Contact Zone, Mary Louise Pratt discusses the power of language use. In the film directed by Agnieszka Holland, titled Europa Europa, similar issues dealing with language use arise constantly with the emphasis on ide

In her essay "Arts of the Contact Zone," Mary Louise Pratt discusses the power of language use. Pratt discusses how language use plays an important role in the world. She shows how language is used to describe a community's identity. She states that language is a key factor in the term transculturation, which she describes as a process by which a culture assimilates its own identity for the acceptance of another culture. She also argues that language is the key factor in which the style of a modern nation is imagined. In the film directed by Agnieszka Holland, titled Europa Europa, similar issues dealing with language use arise constantly with the emphasis on identity and selfhood. The film uses the main character, named Solomon Perel, to illustrate the previous issues. My reaction to the above issues shed light on the importance of language use shown by Agnieszka Holland and Mary Louise Pratt. Language use does indeed play a prominent factor in shaping our identity and selfhood in relation to the world around us. Pratt argues points in which the aspects of language are used to describe a community's identity. This, in further description, means that language use in communities is often described to link the community's occupants. The following passage emphasizes Pratt's postulated inappropriate use of language: Languages were seen as living in 'speech communities,' and these tended to be ...read more.

Acquiring a certain selfhood and an identity is shown similarly in the film with Perel. The scene takes place in bathroom of the German elite school, properly titled the Hitler Youth School. Perel known by his new identity, Josef Peters, yearns to have the complete identity and selfhood of the metropolitan community comprised of the German students at school. Perel's attempts of fitting into with the metropolitan culture go as far as to sewing together the foreskin over his penis. The following description is taken from after a two-day endured experience of this form of transculturation: Tying the foreskin was not successful. Pus had formed under the thread. After the thread was removed, the skin slipped back. I couldn't escape my own body. I still had to hide (Europa Europa scene). This form of behavior is shown by Perel to represent his yearning to assimilate into another culture. It shows the extreme process he took to assimilate into the German metropolitan culture. This scene is a great example of transculturation. Solomon is changing the appearance of his penis to resemble that of the German's. Perel is extremely cautious about his circumcision, as well with his Jewish hidden identity, in order to maintain his identity he understandings that some things must be sacrificed. ...read more.

Pratt argues the understanding of the issues of language using the terms of inclusion, identity, and selfhood. She wants the use of any particular group to take note of her previously made issues in hopes of shaping a better and greater world. Pratt's main focus from the issues spoken about is to get her readers to extrapolate deeper into the issues of the power of language. The use of language is shown greatly in Pratt's essay titled "Arts of the Contact Zone." She focuses on how language is described and shown through the style of a community. In addition to their descriptions and styles of a community, she takes a deeper look into the term she uses called transculturation which is accomplished by means of assimilation of one group's identity into another group's identity. Moreover Pratt emphasizes that the term transculturation is a key factor in identifying a particular identity with the use of language. Agnieszka Holland's film, Europa Europa, uses examples of a Jewish childhood experience in relation to the issues such as "limited," "sovereign" and "fraternal" dealt with language use. She uses the example of a Jewish child named Solomon Perel, from who assimilated into the German identity during the Nazi invasion. The essay along with the film shed great emphasis on language, which shape our identity and selfhood in relation to the world. ?? ?? ?? ?? 7 ...read more.