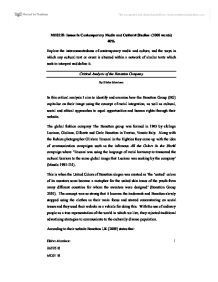 In this critical analysis I aim to identify and examine how the Benetton Group (BG) capitalise on their image using the concept of racial integration, as well as cultural, social and ethical approaches to equal opportunities and human rights through thei

MD3118: Issues in Contemporary Media and Cultural Studies: (1000 words) 40% Explore the interconnectedness of contemporary media and culture, and the ways in which any cultural text or event is situated within a network of similar texts which seek to interpret and define it. Critical Analysis of the Benetton Company By Elisha Morrison In this critical analysis I aim to identify and examine how the Benetton Group (BG) capitalise on their image using the concept of racial integration, as well as cultural, social and ethical approaches to equal opportunities and human rights through their website. The global fashion company The Benetton group was formed in 1965 by siblings Luciano, Giuliana, Gilberto and Carlo Benetton in Treviso, Veneto Italy. Along with the fashion photographer Oliviero Toscani in the Eighties they came up with the idea of communication campaigns such as the infamous All the Colors In the World campaign where 'Toscani was using the language of racial harmony to transcend the cultural barriers to the same global image that Luciano was seeking by the company' (Mantle 1991:131). ...read more.

They are young and of mixed races, with the gender of one member ambiguous. Their display of solidarity encourages the message of 'togetherness', all living in one world as a unified community where a culturally diverse population can mix together, living side by side to one another as a true representation of the real. The retail giant further states on their website that: 'Rather than presenting a simple "objective" portrayal of the world it made a commitment to foster the cohabitation of opposites, to break down barriers and ensure dialogue' (Benetton Group 2010). Their website supports this ethos with multicultural yet ordinary people and not just the representation of 'whiteness' as the norm suggested in the works of Stuart Hall, by constructing a diverse society where all ethnicities can be a reflection of civilisation. According to Hall (1996:117) individuals categorise themselves into 'communities of identification' and with this approach Benetton has gained them a large and diverse consumer group appealing to young people of all ethnicities as each and every individual can identify themselves with a identity they present within their advertising strategy, drawing an instant appeal to their product. ...read more.

There is an opportunity for the consumer to enter a competition to be the next new face in their advertising campaign as well as an interactive catalogue which are all ways the company use social media as a platform to engage with individuals with their brand identity. The Benetton website's representation of 'universal brotherhood' as well as the social and political themes addressed in their advertisements, also accessible from the website, encourage public awareness of 'important social problems' such as the AIDS crisis, environment disaster, war and the diverse portrayal of beauty (Mantle 1999:150). The controversy surrounding them has always been prevalent but they remain adamant that these advertising images are a positive representation of reality and with the use of its website aims to encourage the consumer to actively engage with the brand and its appeal. The website proves to be consistent with the original product and includes access to all previous campaigns, advertising images and press releases on the ethical work they do, presenting further interpretation of the cultural ideas of the brand and its multinational identity. ...read more.