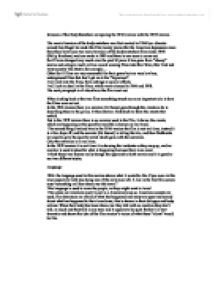 Invasion of the Body Snatchers comparing the 1956 version with the 1978 version.

Invasion of the Body Snatchers comparing the 1956 version with the 1978 version. The movie Invasion of the body snatchers was first created in 1956 by a director named Don Siegel he made this film twenty years after the American depression since then there have been two more Invasion of the body snatchers films made 1978 (Philip Kaufman) and one made in 1993 and there is one soon to come out. Sci-fi have changed very much over the past 50 years it has gone from "cheesy" stories and acting to multi million award-winning films take Star Wars, Star Trek and very recently The Matrix for example... Other Sci-fi films are very successful for their genre but are very low key, underground films that don't get on to the "big screen". I will look into the films, from settings to special effects. I will look in detail at the films, which were released in 1956 and 1978. The next paragraph is all about how the film is set out. When looking back at the two films something struck me as an important role in how the films were set out. In the 1956 version there is a narrator; Dr Burnel goes through the events as he is describing them to the police. It then shows a flash back to show the events that unfold. ...read more.

Sound effects are used a lot in this version to add mystery to the film. I think the music is distorted and screechy on this version to create a much more scarier film to grip the viewers. (Looking back on the old films I see how tame it is compared to the 1978 version I think by this period peoples opinions had changed about what a scary film is.) Lighting 1956: this version is very hard to tell what the light was like because it is in black and white although lights are made dimmer in areas to make it a little bit scarier and to build it up 1978: this version's lighting is very good because it starts off with nice bright daylight and then as events unfold the lighting gets dimmer for me it made the film a little stranger deranged and twisted. Special effects. 1956: special effects are not used as much in this film due to the time it was made in but in some cases like make up which brings a scary look to the actors faces when they have been taken over. Dummies are used in areas but look incredibly cheesy and corny. In many cases though it is a hard thing to do with the resources that they had and the time period that they where in. ...read more.

I think that the films would have been scary back then because nothing had been created like this but now they are rather tame, it is more of a psychological thriller than a horror. Social & Historical I'm sure that many people for thousand and thousands of centuries have thought about what there is in space and the future, people like Nostrodamus stick out in my mind. Around the time both of these movies where produced nobody was sure what was out in the universe. People kept things to themselves and where very protective over things of their own (family etc.) During my research I found out that many people where ignorant about what was out there in space (many people are still like this today maybe because they are scared of what is out there?) Others like to explore these things and find out what is out there and share ideas about it. Looking back on it now we started to come together as one instead of bombing countries left, right and centre and other countries started to care about other countries and spend the millions of pounds which are spent on bombs, military equipment and all other methods that we waste money, it would pay many times over to get the resources we would need to explore space. It would also cloth and feed the entire world not one human being ignored we could come together as one and explore space together forever and find what is truly out there no movies needed. ...read more.