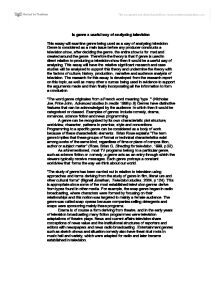 Is genre a useful way of analysing television? The norms and conventions that are found in texts that have expectations and audiences understanding are linked by theorists to genre. In this respect genre seeks to explain how audiences categorize what t

Is genre a useful way of analysing television This essay will examine genre being used as a way of analysing television. Genre is considered as a main issue before any producer constructs a television show, after deciding the genre, the entire show is formed and created around the genre. Therefore the theory is that if genre is used in direct relation to producing a television show then it would be a useful way of analysing. This essay will have the relative significant research and case studies will be analysed to support this theory and undermine the theory with the factors of culture, history, production, narrative and audience analysis of television. The research for this essay is developed from the research report on this topic, as well as many other sources being used in evidence to support the arguments made and then finally incorporating all the information to form a conclusion. "The word genre originates from a French word meaning 'type.'" (Nicholas Joe, Price John, Advanced studies in media 1998 p.8) Genres have distinctive features that can be acknowledged by the audience in which then it would be categorised or classed. Examples of genres include comedy, drama, romances, science fiction and news programming. A genre can be recognized by its own characteristic plot structure, worldview, character, patterns in premise, style and conventions. Programming to a specific genre can be considered as a body of work because of these characteristic elements. Brian Rose explains "The term genre implies that these groups of formal or technical characteristics exist among works of the same kind, regardless of time or place of composition, author or subject matter" (Rose, Brian G, Directing for television, 1999, p.32). As aforementioned, most TV programs belong to a particular genre, such as science fiction or comedy; a genre acts as an entry through which the viewers typically receive messages. Each genre portrays a constant worldview that forms the way we think about our world. ...read more.

But The Cops not only signalled conventional expectations of the police genre for the audience but also sought to manipulate these. The Cops was exciting television because of its negotiation with genre and the audience expectations which it mobilises. At the opening of the first episode, Mel was introduced in plain clothes, with no indication that she was a policewoman; she was seen snorting cocaine and dancing all night in a nightclub. The distinctions between the upholders of the law and those whose criminal activities make them the object of police attention were being blurred right from the beginning of the series. As the young police officers learned more about the inhabitants of the local housing estate who they were often called upon to search, interrogate and arrest, they developed increasingly caring attitudes to these people and greater understanding of their problems. Again, the distance between the police and the community was reduced, and the easy identification of perpetrators and victims, heroes and villains, was made increasingly difficult for the audience. The television form of the series supported this blurring of genre categories and expectations. Scenes in The cops were shot with a single camera, always following the police characters into action, rather that establishing a scene before their arrival. The single camera was often hand-held, moving with the police as they moved through the corridors of the police station, through the streets and into houses. Whereas "television drama programmes are normally shot using the shot-reverse-shot convention familiar with cinema, in which scenes are performed several times with the camera positioned differently each time in order to capture the reactions of one character to another" (Patricia, p157). The Cops aimed to give the impression of unrehearsed action occurring in real time. This is of course the camera convention used in television documentary, where a single camera operator is often forced to pan quickly between speakers, they try to record the action as it occurs and carry the camera physically as action moves across a area. ...read more.

The fact that such examples have mutated over time raises another important characteristic of television genres. Unlike the audiences for films, the audiences for continuing television programmes respond to the texts they consume directly through ratings figures, phone calls to the network and so on. Television producers change aspects of their programmes in response to audience feedback: characters can be killed off, presenters can be taken off-air. In some cases the effect of constant tweaking of the format and content amounts to a change in genre thus may well be irrelevant to analysing television. To conclude academics use generic distinctions to define research projects and organise teaching, while journalistic critics rely upon genres to locate programs within a common framework. Even going to the video store or going through a TV Guide reveals genre as the primary framework to sort out television's vast array of programmatic options. "Genres can be seen as key ways that our media experiences are classified and organised into categories that have specific links to particular concepts like cultural value, assumed audience and social function" (Mittell, p.xii). We can see how analysing television is much more than simply looking into genres, but other aspects like culture provides greater insight into the specific ways in which our most widespread cultural medium shapes our social world through emphasis on power and identity. Nonetheless there are many different ways in analysing television, whether it is culture, history, production, narrative or audience analysis, genre is the foremost way to analyse television. Genre is the categorisation and theme that is used to create the whole program this includes the characters, settings, mise-en-scene, editing and values, so anything that can be a useful way of analysing television can somewhat be related back to genre. The research obtained in this report is mainly based on other academics' analysis on genre and television, most academics such as Altman agree with the significance of genre analysis although they depict some flaws, the research on genre being used to analyse, is very dominant in their writing. ...read more.