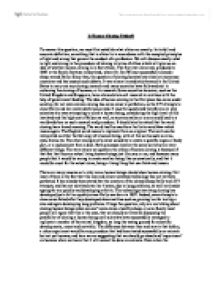 Is Human Cloning Ethical? To answer this question, we must first establish what ethics are exactly. In its full and accurate definition, something that is ethical is in accordance with the accepted principles of right and wrong that govern the conduct of a profession. We will discuss exactly what is right and wrong in the procedure of cloning in terms of ethics which will give us an idea of whether human cloning is in fact ethical. The first ever clone was produced in 1997 at the Roslin Institute in Scotland, where Dr. Ian Wilmut successfully cloned a sheep named Dolly. Since then, the question of cloning humans has arisen on numerous occasions and has caused much debate. It was almost immediately banned in the United States to carry out any cloning research and many countries have followed suit in outlawing the cloning of humans, or its research. Some countries however, such as the United Kingdom and Singapore, have allowed stem cell research to continue with the help of government funding. The idea of human cloning in the first place has come under scrutiny, for not even animal cloning has come close to perfection, as the 277 attempts to clone Dolly and her recent death has proved. It must be questioned therefore as to why scientists are even attempting to clone a human being, considering the high level ...read more.

could very well be created, and although they will be different from their originals in terms of experiences and actual being, that very fact that they are the closest thing to the actual living people would be reason enough for some people to immediately call for a band on all stem cell research before such an possibility ever becomes reality. Because of this minute possibility, but yet harsh reality, the progression of human cloning can be seen as unethical on human and scientific level and not in accordance of the rules we as humans set for ourselves due to the dangers of the misuse of the technology. We must also look at the practical implications of human cloning, and how it would be different from the more natural and orthodox method of reproduction of pregnancy through sexual intercourse, and now more regularly, in vitro fertilization. Since the beginning of mankind, man has always reproduced through pregnancy, and to create humans in test tubes instead of in wombs is a fundamental change in what humans have held dear, in what is a very emotional process. This would bring a great superficiality to the wonder of reproduction as things no longer go through the father and mother, but through an ancillary medium. ...read more.

These procedures have become very much ethical now, even though they were subject to much debate when first implemented, and the same can be said of human cloning, as it might become ethical in the future and a normal process. Those who are for cloning will argue that the social and psychological differences and discriminations between humans and their clones will not be a problem due their creating clones so accurate that the differences will be negligible if not completely accurate. So we have seen thus far the ethical immoralities of human cloning, where the misuse of technology, the social and psychological impacts of human cloning and the superficiality of it have all become great obstacles for its place in mainstream scientific process. There is certainly truth in all those arguments as they could all have a huge impact on our world as we know it. But then there are those people who do not take those first arguments seriously enough and are confident enough of their own claims that make human cloning completely ethical by negating any arguments put forward by people who believe that human cloning is unethical at its present state of technology. My opinion favours the first argument that at the present state of technology and knowledge, to clone a human being would be unethical by both the morals or science and those of humanity. ...read more.