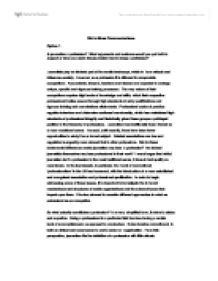 MA in Mass Communications Option 1 Is journalism a profession? What arguments and evidence would you put forth to support or deny any claim that journalism has to being a profession? Journalists play an intrinsic part of the media landscape, which in turn reflects and influences society. However, as a profession it is different to comparable occupations. Accountants, lawyers, teachers and doctors are expected to undergo unique, specific and vigorous training processes. The very nature of their occupations requires high levels of knowledge and skills, which their respective professional bodies ensure through high standards of entry qualifications and rigorous training and examinations attainments. Professional codes of practice regulate behaviour and determine continued membership, which has maintained high standards of professional integrity and historically given these groups a privileged position in the hierarchy of professions. Journalism has traditionally been viewed as a more vocational career. As such, until recently, there have been fewer opportunities to study it as a formal subject. Related associations are few and regulation is arguably more relaxed that in other professions. But do these fundamental differences make journalism any less a profession? Are indeed journalists themselves any less professional in their work? I would argue that whilst journalism isn't a profession in the most traditional sense, it does in fact qualify on most levels. In the last decade, in particular, the level of conventional 'professionalism' in the UK has increased, with the introduction of a more established and recognised association and professional qualification. In order to begin addressing some of these issues, it is important to investigate the internal mechanisms and structures of media organisations and the external forces that impact upon them. It is also relevant to consider different approaches to what we understand as an occupation. So what actually constitutes a profession? In a very simplified form, it refers to status and expertise. Being a professional in a particular field involves having a certain level of accomplishment, as opposed to amateurism. ...read more.

Whilst deemed by some as unethical, many employers view this as the cheapest means of filling vacancies that are already over subscribed. It also avoids the recruitment costs. Recruitment of journalists is very much subject to the particular and possibly idiosyncratic needs and practices of individual employers. These conditions mean that entry into journalism is haphazard and usually more difficult for ethnic groups. This is an issue the industry has addressed to some extent. The NUJ black group and the Commission for Racial Equality (CRE) began looking at the issue of black under-representation in white media in the early eighties. The study found that black and Asian people, whether they had recognised journalism training or not, experienced for prejudice when they tried to get jobs than when they tried getting training. The majority of respondents to the study wanted to see the implementation of equal opportunities policies backed by law. This remains an on-going problem for the industry and something that needs to be more rigorously monitored and addressed. A key pre-requisite of an established profession is a code of conduct. In the broadest sense, this should set lay out key rights and wrongs. Lawyers, doctors and teachers, all follow a set of ethics - moral principles or codes. In journalistic terms, this is sometimes seen as a contradiction in terms. Journalists are very often accused of being totally unethical and many accept the term 'never believe what you read in the paper'. Good journalism in essence should arguably be described as 'news that has been gathered in a morally justifiably manner, topical, truthful, factually based information which is of interest to the reader/viewer and that is published in a timely and accurate way to a mass audience'. However, in an ever-increasing capitalist media industry, this type of journalism could be argued to be in decline. There is a tension between ethics and market forces. ...read more.

Despite conforming to these principles in some way or other, journalism still remains quite different to more conventional professions such as law, medicine and education. It is still possible to become a journalist with very basic qualifications and simply learn when doing the job. Whilst journalism is an important, impactful and potentially powerful career, perhaps one of the key defining factors is accreditation. In the legal, medical and teaching professions, professional accreditation is necessary before you are able to practice within the specific sphere. Journalism remains an anomaly at this level. Despite being encouraged to gain professional accreditation, it is not obligatory. Bodies such as the Chartered Institute of Chartered Accountants in contrast ensure that individual members enjoy 'chartered' status. Never the less, I would still argue that journalism is a profession. Journalists are considered relative experts - with a certain level of written skill and accomplishment. The majority of journalists act in a professional manner, demonstrating ethical and moral commitment. This is an area where journalism often suffers, with many assuming all journalists follow the tabloid mould, scandalous, morally reprehensible and unethical. However, this type of journalist and indeed journalism is in the minority. If we consider power as an occupational differentiator, journalists exercise significant control over their own activities. Subjects maybe commissioned, but journalists are often given free reign on what they write on a certain subject (subject to editing). Such freedom isn't enjoyed within many other professions. Finally, it is important to point out, that journalism as an industry in the UK has changed significantly and will continue to do so. If we look to the USA, journalism is highly regarded as a profession and as such there are a huge selection of well-respected degree-level courses on offer. Perhaps public perception of journalism needs to change before it can become a more widely acknowledged and 'understood' profession. On an academic level, there remains friction between traditional journalists and respected academics, resulting in limited cohesion between the two. On a public level, journalists are often viewed negatively as a result of bad journalism and journalistic practices. ...read more.