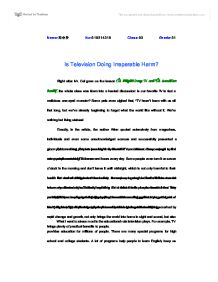 Name:??? No:010214310 Class:03 Grade:01 Is Television Doing Irreparable Harm? Right after Mr. Cai gave us the lesson the Plug-in Drug TV and the American Family, the whole class was flown into a heated discussion: Is our favorite TV in fact a malicious one-eyed monster? Some pals even sighed that, "TV hasn't been with us all that long, but we've already beginning to forget what the world like without it. We're nothing but living statues! Exactly, in the article, the author Winn quoted extensively from magazines, individuals and even some unacknowledged sources and successfully presented a gloomy picture about people's passive family life with TV, and this at once conjured up the adverse influences of TV to me: For one thing, TV can be a big time-waster in some sense. ...read more.

With our worries gaining day by day, the author even suggested our getting rid of this "plug-in drug". But is it the whole picture television gives us? I don't think so: To me, TV, as the most pervasive and persuasive modern technology marked by rapid change and growth, not only brings the world into home in sight and sound, but also brings plenty of practical benefits to people. What I want to stress most is the educational role television plays. For example, TV provides education for millions of people. There are many special programs for high school and college students. A lot of programs help people to learn English, keep us informed about the current events and allow us to follow the latest development in science. ...read more.

It is they who use the television as a cheap baby-sitter while they are out drinking or shopping. In fact, as the users of the TV, I always think that we can be more active. If the program is not good, why not shift it to another or turn the TV off? I also propose to establish a television censorship board with powers to cancel broadcasting rubbish. This board will investigate all complaints received from the public and will judge programs according to a fixed standard... In this way, we can prevent this wonder of electronics from harming the society, and can make it move into a new era, an era of extraordinary sophistication and versatility, which will promise to reshape our lives and our world positively and healthily. ...read more.