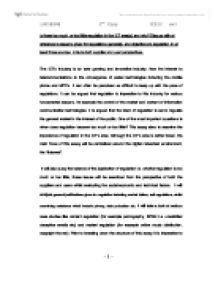 Is there too much, or too little regulation in the ICT area(s) and why? Discuss with at reference to reasons given for regulations generally, and objections to regulation, in at least three sources. Include both supplier and user perspectives.

Is there too much, or too little regulation in the ICT area(s) and why? Discuss with at reference to reasons given for regulations generally, and objections to regulation, in at least three sources. Include both supplier and user perspectives. The ICT's industry is an ever growing and innovative industry, from the internet to telecommunications to the convergence of varied technologies including the mobile phone and MP3's. It can often be perceived as difficult to keep up with the pace of regulations. It can be argued that regulation is imperative to this industry for various fundamental reasons, for example the control of the market and content of information communication technologies. It is argued that the trend of regulation is set to regulate the general market in the interest of the public. One of the most important questions is when does regulation become too much or too little? This essay aims to examine the importance of regulation in the ICT's area. Although the ICT's area is rather broad, the main focus of this essay will be centralised around the digital networked environment, the 'Internet'. It will also query the balance of the application of regulation i.e. whether regulation is too much or too little, these issues will be examined from the perspective of both the suppliers and users whilst evaluating the social-economic and technical factors. It will analyse general justifications given for regulation including market failure, self-regulations, whilst examining resistance which include privacy, data protection etc. ...read more.

It can be argued that this violates privacy as the contents of the communication will have to be monitor in order to specify if the content is harmful. Another important aspect of regulation maybe deemed as the e-commerce sector. These legislations are in place to enhance the fair trading within markets, it is imperative that consumers are fully informed of goods that they are buying online, in 2000 there was debate to regulate the software as well which a lot of company's at the time felt that it was irrelevant to apply these rules. This segment will be exploring issues surrounding under-regulation, such as regulation of content of porn on the internet and its effects on the convergences of technology. It can be argued that the convergences of mobile phones and video technologies act as an impetus to increase the numbers of sex offenders as the technology is not currently sufficiently regulated. Self-regulations often possess to be the most ethical form of regulation, but players argue that "Self-regulation works to a point, but there are sites that always contain paedophilia and we want to take a legal stand and say that we will not tolerate it on our service."(www.silicon.com:14/03/04). It can be argued that regulation on the internet occurs due to various reasons, which include its occurrence as a result of market failure; this may be due to self-regulatory being insufficient or not in the general interest of the public, A good example will be regulations set to ensure underage children cant access porn related websites as it is in the interest of the public. ...read more.

In cases where despites enormous amount of laws, one is not necessarily protected by them. Is Ofcom the newly emerged converged regulatory body adequate to regulate. Critics argue that it doesn't make sense to have one single body regulating across the Internet and telecommunications. On the contrary, there are some more serious cases of market failure, where the public interest is concerned. For example there have been issues of cases where people have been raped and killed as a result of internet pornography and rule need to be to put in place to protect the public. There is also the case of the lost of funds unknowing due to online gambling which, therefore regulation is rather imperative as this will ensure that suppliers inform consumers adequately of the repercussion of playing games online and not deceiving them in order to accumulate debts. It is vital that limits are imposed in regulation as society needs some form of structure for its existence, Lees T, Ralph S and J, L Brown argue that "The virtual cannot be subjected to legislative tyranny of the real" (2000:284) Futurist like Toffler see the internet as a virtual society. If the internet is defined by its virtual cultures, isn't enough to be self-regulatory? How is legislature controlled? How are these regulations structured in terms of Ofcom? Is enough for a regulatory body to examine where regulation is needed and can be withdrawn? Are rule being abided by? Are we fully protected by regulations? The aforementioned are some questions to ponder upon with the deliberation of the prospects of an ever growing information society. ...read more.