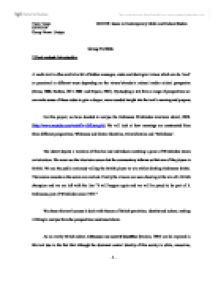 Group Portfolio 1)Text analysis Introduction A media text is often said to be full of hidden messages, codes and ideological values which can be 'read' or perceived in different ways depending on the viewer's/reader's cultural and/or critical perspective (Kress, 1988, Barthes, 1915-1980 and Bryson, 1991). By studying a text from a range of perspectives we can make sense of these codes to gain a deeper, more rounded insight into the text's meaning and purpose. For this project, we have decided to analyse the Robinsons Wimbledon television advert, 2009. (http://www.youtube.com/watch?v=jBfLstxqjok) We will look at how meanings are constructed from three different perspectives; Whiteness and Central Identities, Diversification and 'Britishness'. The advert depicts a variation of families and individuals watching a game of Wimbledon tennis on television. We never see the television screen but the commentary informs us that one of the players is British. We see the public anxiously willing the British player to win whilst drinking Robinsons drinks. The tension mounts as the scores are read out. Finally the viewers are seen cheering at the win of a British champion and we are left with the line "It will happen again and we will be proud to be part of it. Robinsons; part of Wimbledon since 1935." We chose this text because it deals with themes of British patriotism, identity and culture, making it fitting to analyse from the perspectives mentioned above. ...read more.

Citing the work of Prasad and Mills (1997), she identifies different forms of representation of diversity: 'the melting pot, the patchwork quilt, the multicoloured or cultural mosaic, and the rainbow'. She then focuses on the mosaic representation of diversity, critically analising it as a homogenous communion, with lack of identity, without choices, centralizing on white identities. However, she compares the mosaic to the melting pot, where the exchange of cultural practices is a one way process, the more 'powerful' identity taking over 'the other', whereas the mosaic seems to put more value on diversity and thus creates inter-changes between different groups. 3) Centralising and Decentralising Identities British national identity has always been a subject of discussion and analysis as Britain is one of the most comprehensive societies in our contemporary world. The Robinsons' advert uses this aspect of Britain to appeal to all the members of the society by illustrating different households and their reaction to a tennis game won by a British player. The idea that comes across is one of unity and patriotism, regardless of race, ethnicity and religion in important British events. It seems the advert does not centralise on whiteness and implicitly does not portray minorities as 'the others', but treats them as equal parts of the society. The advert can be seen as a illustration of the political issues in Britain, to which Prime Minister Bair (2000), as cited by Gordon Betts (2002) ...read more.

Whiteness and blackness are also emphasised through he use of light. In the white household, the light coming through the window from outside makes everything brighter, as the family, with focus on the little girl, 'also appears to be the source of light'(Dyer, 2002). The setting of the characters also raises issues of class, age and culture, in that we are presented with the working class, the blacks, the youths, the 'normal' white British household, the Asian household; about the latter, Ghuman (1999, 2003) and Sachdev (2005), as cited by Atzaba-Poria et al (2004) affirm that 'many Indian immigrants have made a choice not to adopt a British lifestyle, but have retained the Idian customs and values'. Nevertheless, in the advert they live the experience of a possible future British champion at Wembley with the same urge and anticipation as all the other characters. As Swan (2010) identifies in 19th and 20th century British commodity adverts, 'the mosaic visually represents racial difference within a sameness grid and commodifies it. Such inscription obscures unequal power relations and attempts to diffuse political antagonism from minoritized groups, and placate the imagined white viewer, operating as a 'strategy of containment'(Giroux, 1994, 1998)'. The Robinsons advert is arguably attempting to do the same by placing all the nationalities of Britain in a idealistic homogeneity, trying to appeal to all of them in an equal manner. ...read more.